Revenge of the Son of the Friday Conundrum

It's a commonplace of structuralism that naming something gives it meaning. Cat = not dog, not rat, not mat and not sat, amongst other things. Names exist in networks which give them meaning.

Later theory says that words, and names, don't 'mean' anything: look up 'cat' and it gives you a whole load of other words which you have to look up, ad infinitum.

Psychoanalytic theory says that without a name, you don't exist. More exactly, without language, you can't say 'I'. Therefore you aren't an autonomous individual with expressible desires. Where do you get your name from? From your parents. They impose identity upon you and you become part of the social system as an individual. Before that, you're just a lump of flesh undifferentiated from the rest of the world.

Which is all a long-winded way of saying that names are important. How can you talk about something if you can't name it? It becomes unspeakable, and therefore incomprehensible.

Or does it? I have a little task for you, my children. Last night, in the pub (of course), Emma made this. 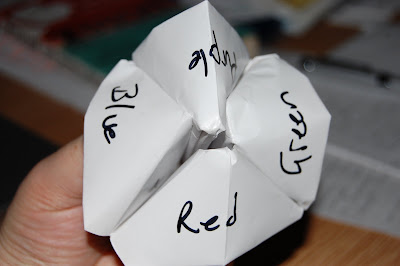 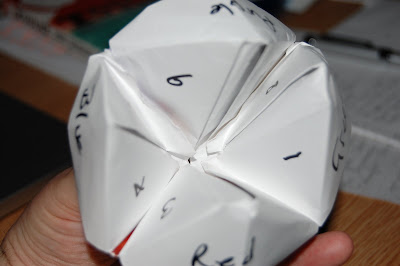 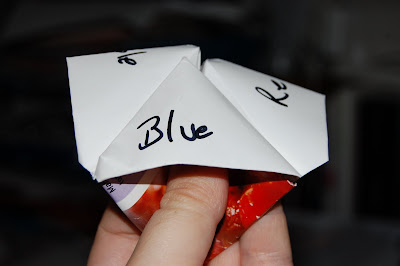 We all recognised it. None of us could name it. We couldn't remember it having a name - yet we all played with them in school, in Britain and in Ireland - we think it's global.

So - tell me what it's called. Ask your friends, or point them here. Tell us what messages you wrote on the inside, what songs you chanted as you played, but most of all - name it.

My theory is that the lack of a name is intimately linked to the game. It's a rudimentary introduction to both chance and fate. Before the final flap is listed, the players and the audience exist in a state of epistemological liminality: you don't know what's going to happen. It's like quantum physics: all the messages are possible until you choose one. In a state of knowing nothing, the lack of a name is entirely appropriate.

So fly, my pretties. Close down the radical instability by bringing me a name.
at 10:38

This is ridiculous. How can you not know what it is called? It is a ONE OF THEM FOLDY FOLDY THINGS.

My heir and spare both agree that they are called fortune tellers. So there.

By the way, shouldn't somebody with the name 'origami' know what they're called?!

Hmmm - too prosaic and vague. Fortune tellers can be people too. There's definitely an aporium where there should be a name.

Do they count as origami?

Mark's comment on the boring name:
At least it's descriptive. Must be a post-hoc formulation though. The girls are clearly holding its powers to themselves - knowing its name would open the temporal gate....

According to 'dictionaryreference.com', Origami is the traditional art of folding paper into a variety of decorative or representational forms, as of animals, flowers and fortune tellers. I may have tweaked the definition somewhat but we shall say no more about it.

Is it childish for me to feel smug?

Yes it is, very. But full marks for research. I hope you spend all day making them with your kids.