Are you aware of the 12th July in Northern Ireland?

It's nominally a Protestant celebration of Dutch King William of Orange's victory over deposed British King James II at the Battle of the Boyne in 1690 - the event which ended Irish hopes of independence and Catholic freedom of worship for over 200 years. Protestants tend to downplay the Pope's support for Protestant King Billy (ordinary peasants of either faith or none were beneath the cares of these gentlemen: the war was a local manifestation of ongoing European struggles).

The official celebrations are run by various Orange Orders (open only to male Protestants), who parade - often through Catholic republican areas - with banners and bands, singing songs about loyalty to the British crown and to Protestant values. Technically, they're all teetotal, but these events are often but not always characterised by anti-Catholic songs, drunkenness, celebration of loyalist terrorist groups and riots. Catholics sometimes protest, and those who can leave the country for the week. On the 11th, Protestant areas have bonfires with effigies of the Pope and other perceived opponents burning on the top.

There's a move afoot to make the event more of a cultural celebration of Orange values than a display of triumphalism, but it's not working. As evidence, here's a picture of two teenage girls celebrating their cultural inheritance. 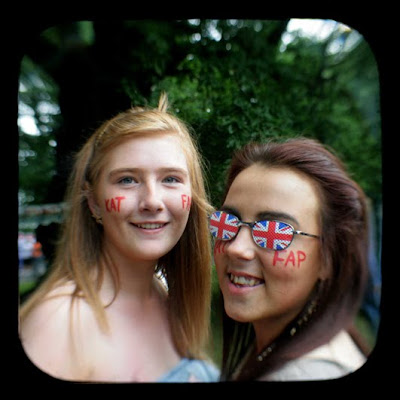 In case you're wondering, KAT = Kill All Taigs (= Irish Catholics) and FAP = Fuck All Papists (Catholics). Here's one Protestant's account of the day.
at 15:03