A week of debatable pleasures

It has been an…interesting week. I've been marking essays (some astonishingly brilliant, others 'requiring improvement'), teaching my first-year drama module hilariously entitled – in my view alone – 'Making a Scene', and we took all the students to see the National Theatre's touring production of Hedda Gabler. I'm finding it really hard not to pronounce Hedda with the 'th' sound of Welsh 'dd'. Some of the students had never been to the theatre before, so I'm looking forward to their views on it. Mine are certainly mixed: the contemporary setting rather obscured the play's examination of Scandinavian late-19th century social mores, but some of the acting was impressive, and the set was very striking.

I read Jeff Noon's Falling Out of Cars at the start of the week too: I'm already a huge admirer of his work, and this one was rather wonderful: like one of Ballard's mid-period surrealist novels with added character depth. It's about a Britain whose inhabitants are made ill by data and sensory overload: pictures, words, broadcasts, signs, colours and sounds become oppressive and unbearable. The narrative is bitty and contradictory, broken up to fit the scenario. I liked it a lot. Now I'm onto Keith Thomas's medieval-to-Renaissance cultural history Religion and the Decline of Magic: it's enormous but wonderful, and I'm learning in detail about a lot of things I knew in outline.

Against my better judgement, I went to see The Post last night. I'm a sucker for newspaper movies, from The Front Page to the Guardian bits in one of the Bourne films. Balanced against that: Hanks and Spielberg. In the end, I liked it a lot. Meryl Streep is wonderful, Spielberg basically reproduced the newsroom/printing press scenes from All The President's Men, and every line dripped with Trump resonance. And it has the awful Chad from In The Loop, playing another WASP git. Try not to dwell on the irony of a defence of press freedom in the face of dishonest, oppressive politicians being made by Twentieth Century Fox.

However, the absolute highlight of the week has been my surprisingly magnified role in the city's Literature Festival: a panel discussion examining Enoch Powell's 'Rivers of Blood' speech 50 years on has suffered some unfortunate panel changes, some considerably heightened language, attracted an SWP demonstration objecting to the presence of a local MEP (who is despicable) and some frenzied politicking. I've found myself in the Editor's office, on the receiving end of rather aggressive phone calls, and talking to the police. It's brought up familiar issues about freedom of speech, no-platforming, the boundaries of fair comment, and a not inconsiderable degree of disapproval from people who just want a quiet life and would like to blame me for an event I didn't propose, organise or want and won't be at. I think it's fair to say that promotions and teaching awards will not be forthcoming in the near future. Or the far future. Just like the past, now I come to think of it…

Enjoy your weekend. Next week, unless things go badly, I can get back to reading and talking about books.
at 16:17 No comments:

I have had a refreshing break from blogging. No, let's rephrase that: I've had a break from blogging, so that I can fit in all the other things like marking, writing TEF reports, preparing for the start of next semester on Monday, doing stuff for next week's Literature Festival, helping our new professor settle in and all the myriad things that conspire to distract me from wasting time on here.

To be honest, I'm not sure there's a lot to blog about. Political events have deepened my general sense of gloom without providing anything fresh (you've heard Donald's a racist? Just recently? Really?). The Toby Young scandal provided some diversion but it mostly depressed me: his appointment simple confirmed my impression that there's nothing worse than a ruling class simultaneously intellectually and morally bankrupt that has no effective check on its behaviour. Despite a wafer-thin majority, they're quietly stacking advisory boards and powerful committees with a gruesome crew of privatisers, bigots, eugenicists and party donors because they can. I know it's fashionable to say that all sides do it, but they don't. Old Labour retains a public service ethos that includes a sense of fair play: New Labour, bereft of all ideas, simply sought credibility by appointing the same cronies who would have been given sinecures by the Tories anyway.

Culturally I've just carried on reading the same stuff I had on the go at Christmas. I've only got one Nigel Strangeways novel left, but they've really run out of steam, although The Morning After Death is quite fun: lots of humour at the expense of Americans, American academics, literature scholars, Business Studies, Yeats and thirsty ex-IRA poets trying to cope with the beginning of the 60s. Unfortunately, it suffers from the same appalling blind spot as 1938's The Beast Must Die: Nigel always thinks that women who've been sexually assaulted are psychologically damaged or blocked not by the assault, but by their failure to admit that they enjoyed it. Once he's pointed this out, they immediately recover to become good compliant heterosexuals. Once I hit this and similar points in his novels, it's hard to credit them for the things that they do get right, such as their decent leftish-politics. I think I'm going to propose an MA module in Golden Age detective novels: Strangeways will feature as an example of what you can – and can't – do when you try to adapt an essentially conservative form to a slightly progressive worldview. 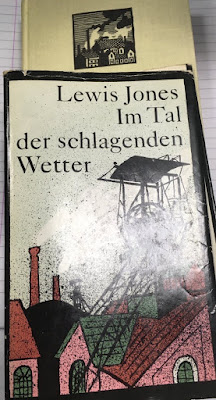 What else have I bought recently? Simon Morden's The White City was OK, though it felt a bit like a decent Doctor Who episode rather than a full novel. I liked his Petrovitch series a lot, though I found it hard to forgive his publishers for changing the previously-uniform cover design for the fourth in the series. Why would you do that? Fire and Fury is sitting on my shelf waiting for me to summon up the energy to spend 300 pages in Trump's company. I've acquired, for the sake of completism, a beautiful East German translation of Lewis Jones's Cwmardy from 1969 (cheap paper, beautiful binding and dust jacket), Christopher Hill's primer The Century of Revolution 1603-1714, Jesuit Matthias Bodkin's 1940 Church-and-Dev Irish invasion novel Halt, Invader (rallying the people to fight off anyone who turns up, English or German), and Armistead Maupin's memoir, Logical Family. That, at least, will be a treat. I've also picked up Janet Montefiore's Men and Women Writers of the 1930s, John Smart's slender Modernism and After: English Literature 1910-1930, Michael Young's satirical novel The Rise of the Meritocracy (I planned to taunt his eugenicist son Toby with it, and it's an addition to my politicians' novels pile), and crime novelist HRF Keating's curiosity A Long Walk to Wimbledon.

They'll all have to wait – teaching starts next week with Hedda Gabler (we're taking the students to the National Theatre's production) and at some point I'll have to get on with Angels in America: the stage production takes 6 hours so I'm sure the students will be delighted. It's worth it though - what a great play.

Musically it's a bit quiet at the moment - I've just been filling in gaps in my collection. Latest purchases are Pauline Oliveros's compelling The Roots of the Moment, two collections of Grace Williams's orchestral and choral works, John Adams's post-minimalist opera The Gospel According to the Other Mary and Scheherazade 2, and Simon Holt's A Table of Noises. I like NMC: it's always releasing interesting new music.

Despite its brilliant new conductor, I've gone off attending CBSO performances because austerity means they put on ever more familiar and conservative programmes, which means endless 19th-century stuff rather than new music. I intend to go to a lot more Birmingham Contemporary Music Group gigs this year.