Another triumph for the Soaraway Sun and the Daily Hate Mail

Pretty much the worst thing you can do to a committed political protestor is accuse them of hypocrisy or fraud. Their credibility's out of the window. They lose supporters and all hope of convincing people of the justice of their cause. 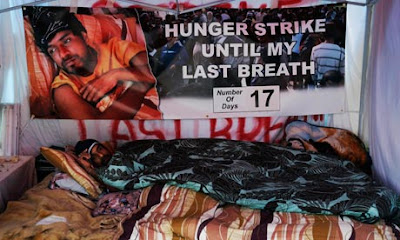 Obviously, the Mail and the Sun hate brown people, refugees and troublemakers, and Subramanyam is all three of these. So they concocted articles claiming that he was actually filmed by the police scoffing burgers when people weren't looking. He lost all credibility and was treated as a traitor by the Tamil people (though why they trusted these papers is beyond me). He even received death threats


Where did the story come from? It's hard to imagine that a journalist - even on these newspapers - would just make it up, so I assume they simply took dictation from a Sri Lankan government spin doctor.


Both newspapers have just had to admit that the stories were entirely untrue and pay up in court. He wasn't guzzling burgers and the police didn't film him doing anything - there wasn't any surveillance.


I'm just stunned that they would commit such nakedly ideological breaches of journalistic integrity, even now. Sure, lazy mistakes and biased articles are their specialities, but to make up something this serious, something pandering to the racist fantasies of their readers is a disgrace.
at 17:30

Email ThisBlogThis!Share to TwitterShare to FacebookShare to Pinterest
Labels: Daily Mail, The Sun