On Wednesday we celebrated 50 years of English at this university. We invited former colleagues, students and friends of the department to a dinner, interspersed with readings and reflections of the previous half-century. The food was good, the wine flowed, the hall was decorated beautifully and the freebies were lovely. The speakers were warm, witty and thoughtful. We looked to the future: a Chair in English was announced, as was a new cross-disciplinary initiative.

As we left, I hugged and thanked Tahnie Martin from the marketing and events department, who worked tirelessly for six months to make it all happen. Yesterday she was killed by a flying piece of debris during the storm that swept the country. Tahnie was bright, enthusiastic, irrepressibly optimistic, bursting with ideas and undaunted by the grumpiness and stress she got from me over the past few months – it's dreadful to think that we won't see her around campus. We're all shocked and saddened, but at least we got to express our thanks for everything she'd achieved.
at 13:43 3 comments:

Email ThisBlogThis!Share to TwitterShare to FacebookShare to Pinterest
Labels: Tahnie

Popped over for lunch today in the school canteen with the new England captain, Joe Root. He seemed like a very nice chap as he signed shirts and shook hands - having been unveiled as captain only a couple of days ago, with a tour starting at the weekend, he'd have been forgiven for cancelling. He'd done a Q+A with students and local children which I missed but which was apparently very good. His reply to the question about giving Pietersen a place ('There's a Twenty20 tournament on at the same time so I think he's probably busy') was a well-pitched, witty response to a tricky issue.

I took a few photos. 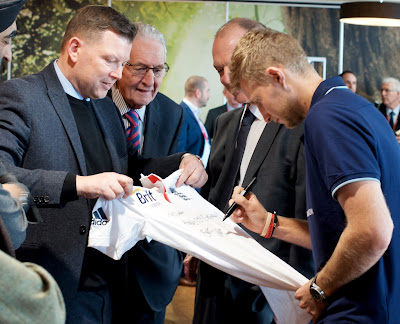 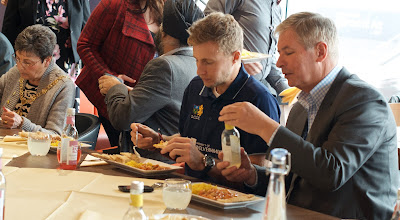 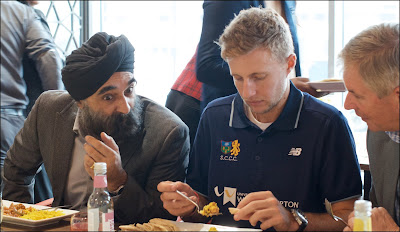 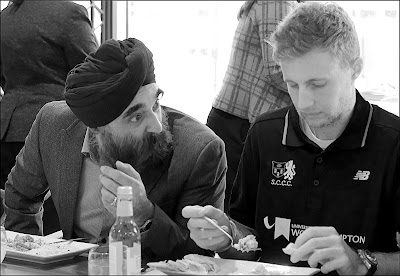 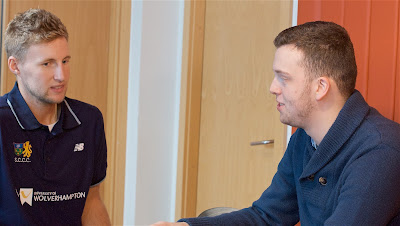 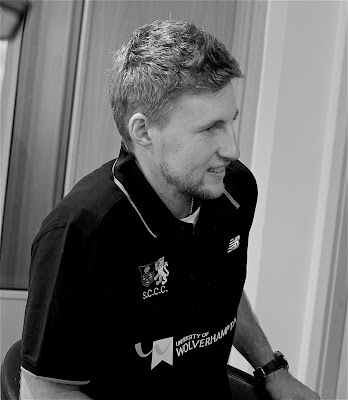 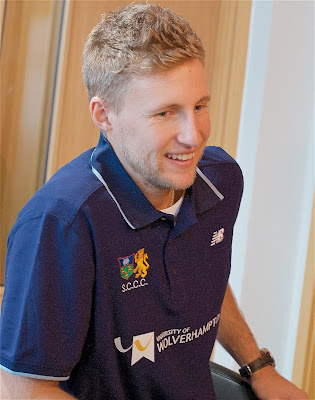 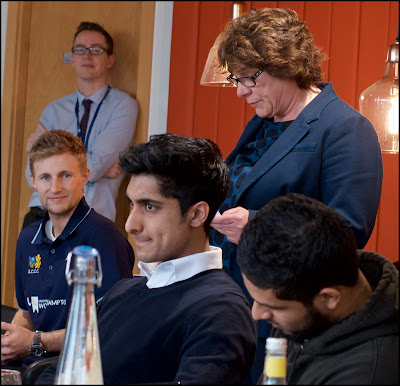 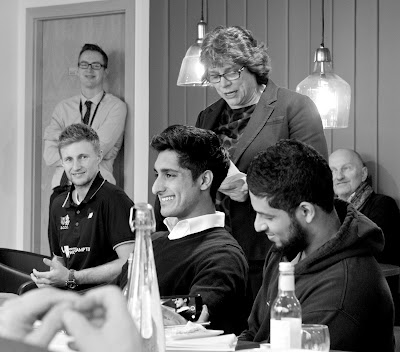 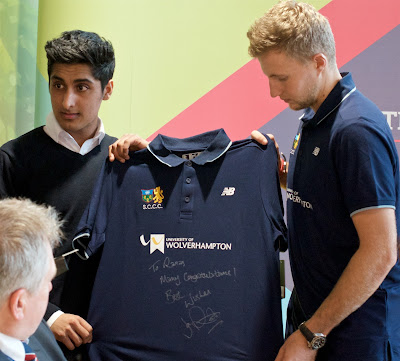 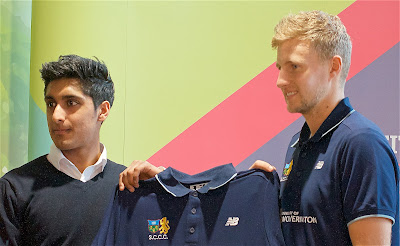 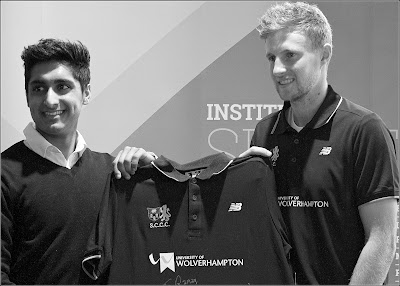 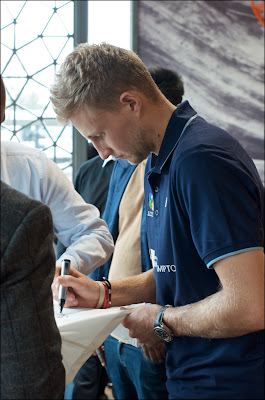 Well, perhaps not all newspapers. The liberal ones will send their Toynbeebots up to the dreadful slums once every five years to wring their hands about why the proles are bitter fat racists. The rightwing ones will pay some toff to churn out 800 words from a golf course bar about why the  proles are Speaking For Britain while still being Unwashed, fat, racist and northern.

What they won't do is spend any time there or ask whether the inhabitants of places like Stoke are reacting to a polity and economy that has absolutely no interest – whoever is in government – in managing the transfer from full, mass, employment (Stoke had potteries, coal and steel) to a post-industrial economy. The liberal ones send in the Tristrams now and then like ineffectual missionaries to explain why globalisation is brilliant and they have to get with the programme, and then wonder why the oiks fall for the constant stream of racist bile delivered in simple words by the right. And poor old Labour has to run an election campaign with the lotto voce slogan 'We know Tristram was a selfish prick who ran away at the first sniff of a canapé, but this time it'll be different'.

There's a distinct air of David Attenborough about the media and state's attitude towards places like Stoke, except that he loves his subjects while they are embarrassed by or cynical about those left-behinds. Poor old Stoke - hard to find a babycino or a hedge-fund trader there. What hope do they have? For the people of Stoke, politics is like the weather: it happens to them and there's nothing they can do about whatever is thrown their way.
at 12:16 1 comment:

And so we beat on…

So, many terrible things are happening and they're happening so fast that I can't keep up. I'm living in two time zones: my own, and Donald Trump's, waiting to hear of his latest assaults on reality and decency. The Black History Month speech in which he boasted about himself, listed a few black people he clearly knew nothing about, and relegated them to the status of forerunners to the true black heroes: Trump donors. The National Prayer Breakfast, at which he assembled lots of religious people before mocking their raison d'être by 'praying' for Arnold Schwarzenegger's ratings. The call to the Mexican President which included a threat to invade that country ('banter'). The angry call to the Australian PM, a natural ally in reactionary bigotry, which was terminated half-way through because Trump was 'tired' (according to the White House) or a boor (everybody else). The ceaseless stream of executive orders making life hard for the weak and very, very easy for the powerful. His spokesman's invention of the Bowling Green Massacre to defend the Muslim Ban was today's low point.

And that's to say nothing of the Brexit Lemming Dash. But I have nothing to add that cleverer people haven't already said. So instead, here are some pictures from the Literature Festival I helped organise last weekend. We had nearly 80 events over a long weekend, most of them free. Some were over-subscribed, some were quiet, but none were failures. We were spread over multiple venues: churches, galleries, a farm, theatres, the university and many more. The plan was an active festival: some headliners that people could sit and listen to, but most were participatory, and seemed to attract people who wouldn't go to Edinburgh or Cheltenham festivals. It was hard work but I was stunned by the enthusiasm of those who volunteered to put on events, and of those who came to them. The budget was tiny – about £2000 plus what came in from ticket sales – but we managed. We're definitely putting it on again, and we intend to be even more ambitious. I did the Q bit of a Q and A with novelists Catherine O'Flynn and James Hannah, introduced Sathnam Sanghera, looked after wordl-famous-in-Tipton Doreen and generally floated around opening doors, pointing to places and providing coffees. 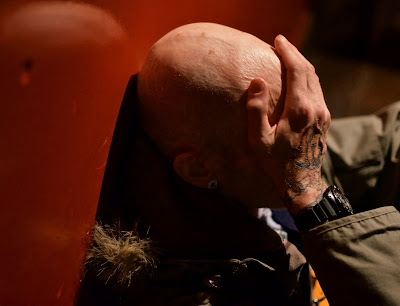 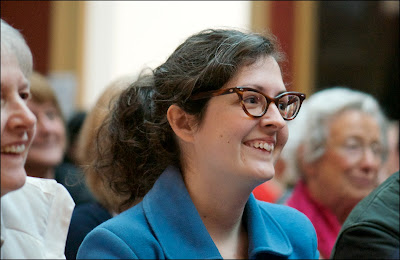 A special mention for the lady at Doreen who asked me what I was studying while I ushered her group in. I'm nearly 42 and course leader of English, but for a moment I almost believed I looked young, fresh and innocent enough to be a student.
at 13:17 No comments: