Another triumph for The Hegemon

Yes, it's a £230,000 grant reduction as a punishment for recruiting too many students last year: student fees cover a small proportion of the actual cost of teaching, and the government pays the rest. They're not pleased. Oddly enough, this sum is roughly the same as the Vice-Chancellor's salary. Hmmm, I can see how we can make this saving very easily.

Meanwhile, all the universities are having their teaching budgets by £82m cut as an emergency measure because all our money has saved the banks - on top of the £1bn cut already announced. No news yet of how much we're going to suffer, but it won't be easy.

Still, not as cold as this school, in Bridgwater. Despite Britain being the 5th largest economy in the world, these kids will still be struggling along in a cold, leaky shipping container. Oh well, it all pays for the Tory Scum reduction in corporation tax and for the 'free schools' nonsense. 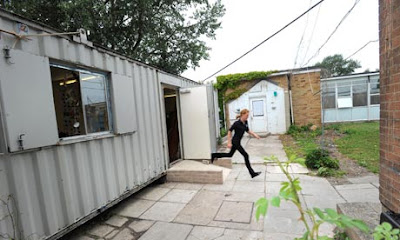 They're not an extreme example, either. In the same constituency, as school designed for 300 people holds 1200 kids.