An heirloom for your children to cherish

Do you have a creepy royalist relative with an unhealthy preference for young people?

Then the Franklin Mint has the PERFECT gift for the reactionary paedophile in your life. For only $150 you can acquire this cherishable porcelain statue of Princess Diana as an adult baby for your children, grandchildren and great-grandchildren yea even until the fortieth generation. 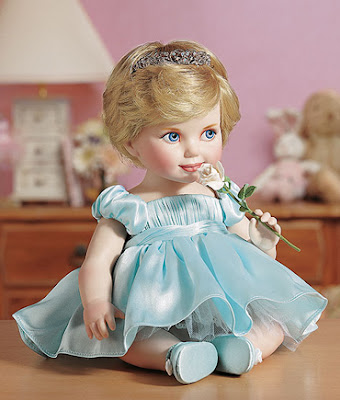 This horrible, disturbing woman's head on baby's body is uncomfortably close to Viz magazine's parodies of such junk. I remember the Princess Diana English Breakfast Plate Full Of Hope, the Bernard Manning Racist Cunt Of Hearts Plate, and of course the junior Adolf Hitler doll, 'Ich Bin Ein Naughty Boy', produced by the Mitford and Mosley Mint ('proud to present a charming study of nascent evil'), which we had on our kitchen wall. You can even buy the Life Of Christ In Cats teatowel (He dried for our sins), a must for feline-loving fundamentalists. 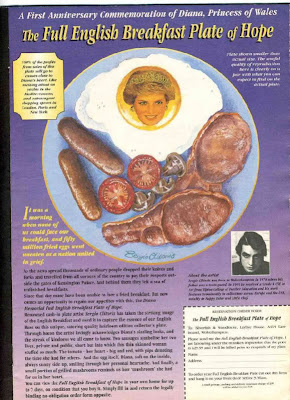 Crafted in fine hand painted stuff, cheeky little Hitler is perfect in every detail. The toothbrush moustache...the chocolately mouth twisted in genocidal hatred. All yours for £199.99, 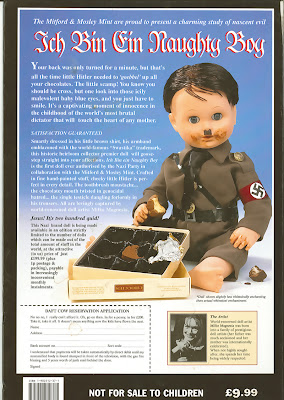 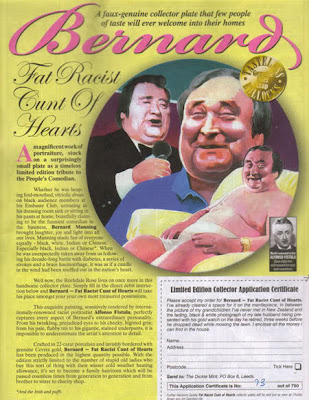 Interestingly, nobody mentioned the royal family in class when we were discussing Britishness and Englishness (insert compulsory German/Greek joke here). Very encouraging: perhaps celebrity culture, which owed so much to Diana, has drowned the rest of them in the pit of pointlessness.

Can you remember Diana's death? I woke up early one morning, switched on the radio to hear the announcement, then went back to sleep. I was profoundly indifferent, other than to regret a violent death and the orphaning of two children. I was shocked to discover later that people I respected appeared to be mourning as though someone they knew and loved had gone, not a media confection who shopped for a living and couldn't be bothered to wear a seatbelt. It really did feel like national hysteria: no good music on the radio (except for heroic Jo Whiley, who played the Smiths' 'There is a light', perhaps forgetting the line about being crushed 'in a darkened underpass'. What made the nauseating spectacle so much worse (and let's not forget that David Cameron's such a ghoulish weirdo that as a student, he camped out on London's streets to get a view of the coffin) was the way the tabloid media switched, literally on the day she died, from treating her as a treasonous prostitute to sanctifying her as everything that was best about Britain.

She was, of course, neither. She was an uneducated toff with a vague sense of charity extricating herself from a failed teenage (astonishing, considered in hindsight) marriage and a dysfunctional family. That's quite enough to be getting on with.

If you can't get enough of Diana, she's on Twitter, from Heaven!

Our kitchen wall was great. You omitted to mention No.22 Shit Street, amongst others.

Complete with broken washing machine and burned, urine-stained mattress in the garden.