The USSR wasn't all purges, executions and bread queues: there was an optimistic side to the People's Revolution (see also Spufford's novel Red Plenty, though admittedly it was submerged in grey concrete and misery for long periods (thanks to Stalin's perversion of Communism, but that's a rant for another day). Modernism and progressive politics once went hand-in-hand, until lack of money and imagination, coupled with poor-quality materials, produced the horrid hutches beloved both of East German commissars and British municipal housing officers. But there was a window in which People's Palaces and amenities were made with the very latest materials (to show how modern the USSR was), which meant concrete, allowing buildings to branch out, swoop and swerve. What a shame that concrete ages so badly and the building standards weren't great. But the architecture was often magnificent.

Here's the Druzhba Sanatorium in Ukraine - once mistaken by the Pentagon for a launch-pad: rooms now available. 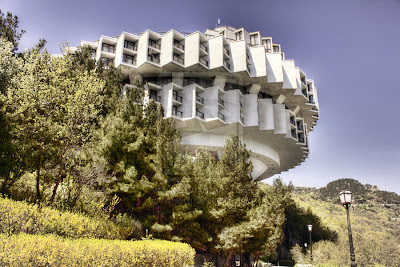 If you've acquired a taste for architecture-as-politics and vice versa, you really need to read Owen Hatherley's books and blog. He hates what property developers and Blairite bullshitters have done to our notions of architecture and public space.
at 14:39

I ordered my copy as soon as I saw your earlier post - it came in a very large box didn't it. And about a month early, so I was a bit baffled when the postman handed it over. The only other thing I'd ordered was a camera lens and I was thinking, "I know they're fragile, but surely not..."

Camera lens… another thing I'm saving for. I'm after an f/2.8 telephoto, but that's at least a year's worth of saving up.

The CCCP book is astonishing. I guess it's like the Romans: with no planning permissions, cheap labour and a massive sense of importance, you can do what you want, whereas - as Hatherley points out - if you've got to fake various things you don't believe such as greenness and democracy, you get poor and unimaginative buildings, like New Labour's 'regeneration' and PFI efforts.