There's a branch of poetry known as 'found' poetry (like found art), in which texts crop up in unexpected places and are recognised as poetry rather than written with poetic intent. One such example is The Poetry of Donald Rumsfeld: some bright spark realised that the way America's Darth Vader spoke - gnomic, highly metaphorical, rhythmically structured - is poetic, and published his speeches divided into verse, and also set some of them to music. That link includes some clips of the songs.

I found some poetry yesterday, while searching BBC's Ceefax for a fix of hot Stoke City news. I think it works: 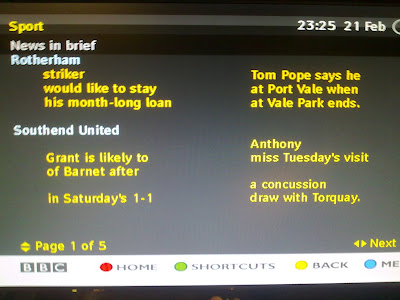 To me, it reads like Ezra Pound or H. D. had developed an interest in football.
at 09:26

That is utterly brilliant. And poignant.

I love Ceefax, although the traditional version, not that digitised upgrade.

You in sometime this afternoon/early evening Vole? Crisis of confidence reared it's head again :(