Most of the time, when you order a CD, you don't get a handwritten note from the musician thanking you for your purchase and telling you to 'play it loud'. 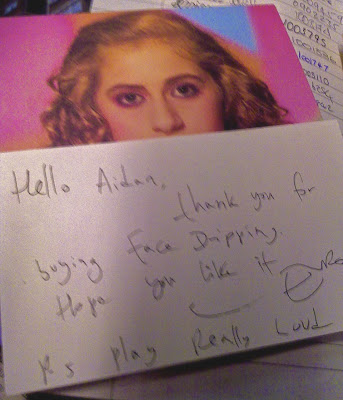 That's what happened when I bought Euros Childs's new CD, Face Dripping. If you don't know who he is, he was a leading member of Gorky's Zygotic Mynci, Welsh teen indie psychedelic sensations. Since then, Euros has been producing wonderful, odd, melancholic stuff. (Bandmates John Lawrence has been recording electronica as Infinity Chimps and Richard James has recorded some ethereal wonderfulness under his own name too). Euros also has an album out with Norman Blake of Teenage Fanclub, under the name Jonny. It's very good.

So anyway, is this personal touch a sign of things to come as record labels fall apart and musicians make their livings from touring and a cottage industry? Or does Euros have so few fans that we're now on first name terms? How I hope it's the former. You all need some of his magic in your homes.

You can download the album for free here, but do leave a donation: musicians need to eat you know.
at 17:05