In my pigeonhole today were a number of interesting objects.

Superman: War of the Worlds, an interesting insertion of the Man of Steel into the H. G. Wells story, bought mostly because Oswald Mosley, the wannabe British Hitler, makes an appearance and I'm thinking of writing a piece on literary representations of this odious individual. It was packaged beautifully: clearly nerds are much more careful with their belongings than ordinary book dealers.

John O'Sullivan's A Photographic History of Mining in South Wales. I'm giving a paper on masculinity in mining fiction at a conference on Saturday, so it should provide some good images. Once I've written the damn thing.

Stead Jones's reprinted Make Room For the Jester, another piece of forgotten Welsh Writing in English reissued by the Library of Wales.

A remote control for my Nikon D7000. Rather pleasing that it cost £6 considering the huge cost of the actual camera.


Sally Ledger's The New Woman: Fiction and Feminism at the fin de siècle.

Finally, and most oddly, this piece of craftwork. I have no idea who made it, so thankyou to whoever put it there. File me under 'bemused but touched'. 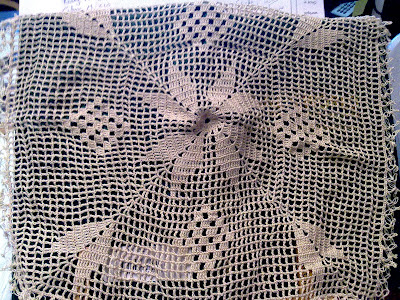 Glad you liked it, took me fucking 8 hours.

I should have recognised your delicate knotwork.

Don't compliment stalkers Vole, it only encourages them. Today it's craftwork, tomorrow it's a lock of pubic hair.

(Not that I've ever stalked anybody of course honest you can't prove anything).

ed's comment just made me laugh so hard, inappropriate and brilliant!

That's what I thought it WAS made from.

The mystery is solved. It's a Turkish Cypriot student's grandmother's work, designed to keep flies from the contents of jugs. It was 'donated' by a kind colleague (and PV reader) who wanted to dispose of it and shoved it in the nearest available pigeonhole. A thousand thanks!

I shall drape it over my face when catching forty winks in the office. If it stops moving, you'll know I've died.