No, it's true. I've just read a news article which claims that the youth are rejecting driving licences:

"Car manufacturers are worried that younger people in particular don't aspire to own cars like we used to in the 70s, 80s, or even the 90s. Designers commonly say that teenagers today aspire to own the latest smartphone more than a car.

Underpinning all these innovations and ideas is what Liske sees as a major behavioural shift among the generation of "digital natives". "They don't care about owning things. Possession is a burden, and a car is a big investment for most people – not just the vehicle, but the permits, the parking space."

Admittedly, I don't fit that demographic, but I'm with them. The ownership thing is interesting too: I insist on owning physical books and music, but I don't own a house (i.e. can't get a mortgage), and understand the appeal of avoiding financial burdens if the payoff is limited, and there's a lot to be said for a simple life, though 'irresponsibility' could equally be applied to a youth spent avoiding ownership.


I didn't learn to drive when I was 17 because I was immured (one of my favourite words) in a boarding school. In any case, despite living in the country, my parents had no interest in teaching us to drive, so I got used to walking a mile or two to the bus stop, and organised what passed as a social life by sleeping on friends' floors in town for days on end. Summer conversations with my family tended to follow this pattern: 'Where are you going?' 'Out'. 'When will you be back?' 'At some point'. Some days later, the conversation would be resumed: 'Where have you been?' 'Out'.


My university in a small town was accessible by train and a car - let alone tax and insurance - was out of the question financially, so that took me into my twenties. Graduation saw me return home for a period of unemployment and then the 10 p.m. - 4 a.m. data entry shift (which is why I'm now an academic). I got there on my bike, riding 15 miles each way, and have never been fitter. Or sweatier. After that, it was off to The Dark Place, where I often had cash-flow issues and lived within a few minutes of the university - exactly fitting the general trend:


"It's partly the cost of ownership, the cost of insurance," he says. "Other factors that are more speculative are that there are more people in higher education, which typically takes place in urban centres where the car isn't part of the mix. Then people stay on in these urban centres."

Along the way, I also developed an environmental sensibility, though whether it began sincerely or as an excuse to brandish in front of mocking drivers, I'm not sure. But it's real now, and it's shared by many of my friends: some have licences, some don't, but almost none of them own cars. If I had children I'd probably feel the need to drive, and I sometimes feel guilty when someone else has to drive me, but mostly I'm quietly pleased that I've arranged my life to avoid cars: feet, trains and buses get me virtually everywhere I need to go. Of course, this is partly reliant on living on a small island in a mature post-industrial phase, and it's unlikely to be sustainable as Tory governments attack mass transit from every angle. It's true, too, that many of the places I'd like to visit are beyond the reach of public transport, but I'll cope.


There is a sense, which I share, that cars have been a massive dead end. Apart from the insane economics of borrowing money to buy a polluting chunk of metal which then needs massive taxes, fuel, maintenance and insurance, only to be used for a few minutes per day, I very rarely feel the emotional pull promised by car ads: freedom and individualism. Margaret Thatcher said that a man in his twenties riding the bus should feel himself a failure: it's never seemed that way to me, though my students have repeatedly mocked me for not having a licence because to them it seems to promise autonomy, personal expression and adulthood. To me, the car represents the destruction of quality of life: look at our cities, turned into stinking, noisy hellholes by privileging individualist movement and speed over humane scales and velocity. Some people appear to think that's a good thing, like the AA spokesman quoted:

I don't accept that: I think we'll find ways to spend money without giving it all to insurers and petrol refiners: perhaps slow, quiet, safe cities might tempt people to visit more galleries, shop more or go out more. I like buses and trains, despite the occasional screaming child or the time I had to avail myself of the emergency exit at a junction because I was about to vomit: a rather drunk chap who'd very recently soiled himself in every way possible decided to talk to me, right in my face. Despite being a fairly reserved rodent, I'm happy to talk to people, and don't feel the need to fart fumes in children's faces to prove that I've 'made it'. I worry about those who do: the men and women who choose 4x4's and sports cars to cocoon themselves from humanity, not those who require a vehicle to get by in a stupid economic and social structure which demands that we all rush from place to place. I realised long ago that car ownership isn't freedom, it's another way to become enmeshed. I like what I hear about Scandinavia, where wealth and status isn't announced by the vehicle in front of your house: functional cars are kept for their useful lives, rather than used in a fruitless and never-ending war with your neighbours.


But never mind all these nice trends. I'd reduce driving in far less subtle ways. I'd ban 4x4s and other ridiculous vehicles from common ownership: builders and farmers can have rugged 4x4s, nobody else. Then I'd start removing things from cars. Start with iPod connections and stereos. Then padded seats and seat belts. Then windows. Ban ABS and disc brakes. Before long, if you're desperate to drive, you'll be allowed to stand on a motorised plank. Your dedication will impress me.


Despite that, I'm still impressed by car designs. I'd have a Citroen DS and a Morris Minor convertible on my driveway - as industrial art. But I would say that: I'm Vole, not Toad: 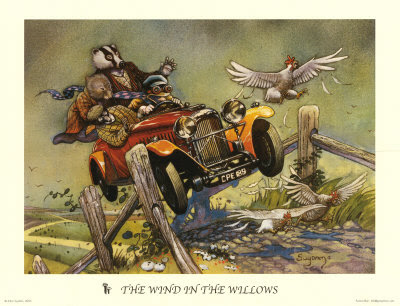 Email ThisBlogThis!Share to TwitterShare to FacebookShare to Pinterest
Labels: driving

'the car represents the destruction of quality of life'
- to me it meant freedom. As a long time agoraphobic unable to cope with trains and buses it meant I could travel further than my own front door and allowed me a glimpse of life and a society that I wanted to be part of. I'm now 'cured' but will always be grateful to my car.

That seems perfectly reasonable to me: it is liberatory in that sense. I think that as a wider society, we've subjugated our work, leisure and living conditions to the convenience of the motor car rather than the human.

The car won't go away; this is the great car economy. I wish it were otherwise. I despise the reliance upon it. Yet I never cease to be astonished how attached folk are to their cars: they simply love them (this is not hyperbole). I love my bikes. My only act of rebellion is to own a thoroughly unfashionable car. And that is not much of a stance. Oh yes, I get very angry when I see Bull Bars on a car in say Chester. Very mad. I dont think Vole is anything like Toad.

I tried to put my 25 yr old stepson on my car insurance, and was told that if I did it would rise from around £300 pa to £3000, and it would go UP if he passed his test and stayed on my insurance. This is one of the reasons that so many youngsters don't have cars - and probably one of the reasons that some of those that do have cars don't have insurance. I kind of agree with Heathcote Williams on cars generally though (check 'Autogeddon')