Sadly back to an earlier age

Today's big media story is the ongoing effort to rescue four Welsh miners: two have definitely died, and the fate of the others is as yet unknown. The mass media and the social networks are keeping a kind of vigil, with individual citizens expressing their concern and sympathy.

In a sense, this outpouring of kindness is symptomatic of how our lives have changed. A hundred years ago, Welsh (and other) mining accidents regularly took the lives of hundreds of men (women and children too). Industrial life, familiar to a far greater proportion of the population then than now, was nasty, dangerous and short. Newspaper coverage presented scenes of mass grief: long lines of coffins, anxious groups of wives and coal-blackened colleagues waiting at the pit-head: the mine disaster is a set-piece in all the Welsh industrial novels I specialise in. Lewis Jones's Cwmardy and We Live depict in shockingly naturalistic fashion the explosion and social destruction which follows: Llewellyn's How Green Was My Valley uses mining accidents to make cheap and dishonest political points. 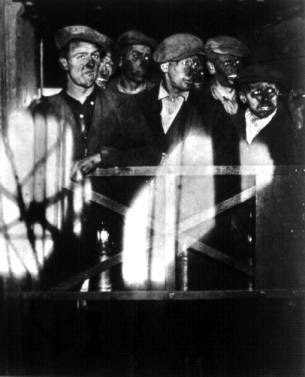 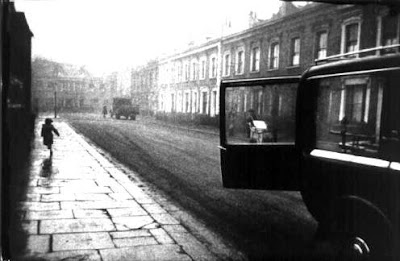 Robert Frank, 1950s.
This latest disaster is both similar to, and different from, those previous events. Thankfully we are less ready to accept mass death as a natural feature of work. The mass media both cheapens and heightens our feelings about these men: their small number means that each individual will be afforded greater personal attention. Soon we'll hear about their children, partners, interests and activities. To those capable of empathy, such things will depeen their sorrow. To many - and to the newspapers -  these details are ingredients in the pornography of grief, grist to mill of sales.

This latest accident exists on two planes. On one, some brave men have lost their lives, families have lost loved ones, and more names are mournfully added to the list of those who died for our comfort: the constantly updated story tries - dishonestly, I think - to close the gap between our distant sympathy and the visceral, inconsolable grief of these miners' families and friends.

On the other plane, the events become a narrative, one which is inescapably linked to the New Zealand and Chilean dramas (and for historically-aware working-class and Welsh observers, the hundreds of previous mine collapses): one can sense the journalists' disappointment that the familiar 'grief' story is edging out the excitement and drama of the Chilean 'heroism and triumphant rescue' one, which could have sold newspapers for weeks.

I hope this doesn't sound cynical. The web is full of emotional responses, and I fear that people's understandable outpourings will obscure the complexity of how such things occur (was the mine safe, for instance?), are reported, and felt. I don't want the specific, special horror of this particular event to be swallowed up in the tired, familiar narratives of media reporting.

(Finally, let's not forget that the privatised coal industry is rife with exploitation and recklessness: here's an extract from Seumas Milne's piece about it from 1994):

On Friday nights in the Welsh valleys, miners go from pub to pub hunting for their employers to claim unpaid wages. Pay cheques bounce, mining companies close and re-open under other names, men are sacked for being union members or refusing to work on Christmas Day.
In some pits, miners get no basic minimum and are only paid by the tub of coal produced. Underground, they stand in streams of water, hacking at the face with picks and shovels. Wooden roof props, phased out in publicly owned mines 40 years ago, are standard.
Pit ponies haul rusting carloads of anthracite back and forth from the face. On the surface, there are no showers. The coal owners are back with a vengeance. This is private mining in 1994: the promised future of the British coal industry....
Last year, the fatal accident rate in privately owned mines was 23 times that in British Coal collieries.
Government health and safety officials advise caution when comparing the public and private safety records because the smaller numbers in private mining can lead to sharp fluctuations in the fatality figures. So it seems fair to mention that the death rate in private mines was only seven times as high the year before.
One man who fell victim to the new cost-cutting coal owners was Phillip Rees, a 32-year-old miner electrocuted at the Blaengrennig colliery in the Amman valley just over a year ago.
"The manager called me up and asked if this boy was one of my members," recalls Anthony Jones, the local National Union of Mineworkers official in charge of private mines.
"I said I'd have to look in my records. It's just there's been a bit of an accident, he told me. I said I'd come right over anyway. He was dead when I got there. They didn't even know where he lived."