I'm feeling very territorial today: it's graduation and the start of the academic year, so the building is packed with colleagues and students. After having the place to myself for a couple of months, it's huge culture shock. No more Slayer on the office stereo. Fighting for the last limp leaf of lettuce (I love alliteration), feeling compelled to clean up the office.

Anyway, I'm not getting any productive work done today. Too tired from the UK School Games. I got an average of 4 hours' sleep per night, not helped by Sheffield University's hospitality. OK, it's a seriously good university and the Endcliffe Village campus is tranquil, even beautiful, but they have a serious pillow deficiency. I'm used to 5 extra-deep pillows: they provided one which was about as thick as an iPad (God, I'm so up-to-date) and less comfortable. If you must apply there, bring your own bedding.

I'm spending the afternoon editing and uploading the photographs I took over the last few days. But before I do, some literary gems. I took 3 thick books to UKSG, and read only 100 pages of Maria Edgworth's Patronage. It is glorious, though rather conservative and casually racist. Her plotting is much, much weaker than her contemporary, Jane Austen, but the narrative is wonderfully outspoken, dry and witty, and she's not afraid of tackling the big subjects: politics, corruption and breeding as well as the usual marriage-seeking and class paranoia. She also despises lawyers with a passion. 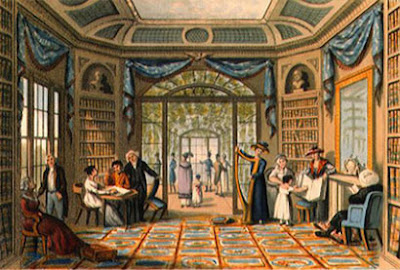 
It has by some persons been thought, that women who have been suffered to acquire literary tastes, whose understandings have been cultivated and refined, are apt to disdain, or to become unfit for the useful minutiae of domestic duties. In the education of her daughters Mrs. Percy had guarded against this danger, whilst at the same time she had encouraged them to cultivate a taste for literature, which adds so much in all conditions of life to the capacity for happiness.

Which reminds me of a Louisa May Alcott line from Work: A Story of Experience:


She is too fond of books, and it has turned her brain

On the subject of patronage, there's plenty to direct us, inflicted as we are by a government populated by inherited millionaires who all happened to attend the same three schools and two universities, and whose object is to hand all land, public amenities and services to their friends in the City (and supported by pitiable henchmen like Paul Uppal MP - led by a Prime Minister whose first job in the Tory Party was apparently acquired after a helpful phone call from Buckingham Palace:


…whenever the places of trust and dignity in a state are to be gained by intrigue and solicitation, there is an end of generous emulation, and consequently of exertion. Talents and integrity, in losing their reward of glory, lose their vigour, and often their very existence. If the affairs of this nation were fought by the corrupt, imbecile creatures of patronage, how would they be guided? - how fought? - Woe be to the country, that trusts to such rulers and defenders!

Those who benefit from Patronage, Edgeworth says, are very poor specimens with a disastrous sense of entitlement. I find myself attaching, Cameron, Osborne and Gove's faces to these inadequate, greedy, scheming characters.


Those young men who are brought up to expect patronage… are apt to depend upon it too much… and consequently neglect to acquire knowledge. They know, that things will be passed over for them, and they think that they need not be assiduous, because they are secure of being provided for, independently of their own exertions; and if they have a turn for extravagance, they may indulge it, because a place [powerful position] will set all to rights.

And in this economic climate, we can all learn from Lord Oldborough, Commissioner Falconer and his wife:

… they laid it down as a maxim that, if people wished to grow rich, they must begin by appearing so. Upon this plan everything in their establishment, table, servants, equipage [carriages], dress, were far more splendid than their fortunes could afford. The immediate gratification which resulted from this display, combining with their maxims of policy, encouraged the whole family to continue this desperate game… "the poorer they were, the more necessary to keep up the brilliant appearance of affluence".

The Commissioner sometimes has doubts, particularly when the creditors come calling, but in very unsisterly fashion, Edgworth puts this last maxim in the mouth of his wife.

It's also a very self-aware novel: literature is up for discussion frequently, and there's a metafictional consciousness at play, much like Austen's Northanger Abbey: here's one sister pointing out to her sibling that she's far too boringly virtuous ever to be a novel's heroine (and it's true - the Percy family are pure, honest, kind-hearted and a little bit dull compared with their corrupted, self-seeking but more human Falconer cousins):


Bless me, Caroline, if you are so prudent at eighteen, what will you be at thirty? - Beware! - and in the mean time you will never be a heroine - what a stupid uninteresting heroine you will make! You will never get into any entanglements, never have any adventures; or if kind fate should, propitious to my prayer, bring you into some charming difficulties, even then we could not tremble for you, or enjoy all the luxury of pity, because we should always know, that you would be so well able to extricate yourself, - so certain to conquer, or, - not die - but endure.

…you shall not be my heroine - you are too well-proportioned for a heroine; in mind, I mean - a heroine may, must have a finely proportioned person [I think she means prominent embonpoint], but never a well-proportioned mind. All her virtues must be larger than the life - all her passions those of a tragedy queen… Good people are acknowledged to be the bane of drama and the novel - I wish never to see a reasonable woman on the stage, or an unreasonable woman off it. - I have the greatest sympathy and admiration for your true heroine in a book; but I grant you, that in real life, in a private room, the tragedy queen would be too much for me; and the novel heroine would be the most useless, troublesome, affected, haranguing, egoistical, insufferable being imaginable. - So, my dear Caroline, I am content, that you are my sister and my friend, though I give you up as a heroine.

(For more on London's Literary Ladies, start with Katelyn Ludwig's fine introduction to the Bluestockings.
at 14:36