Welcome to the worst place on earth

Another day, another survey… This one claims that the UK is the worst country in Europe in which to live. As The Dark Place was once listed in Lonely Planet as the 5th Worst City On The Planet, I think it's safe to say that I must dwell in the world's veritable armpit.

Or do I? It's not secret that I've never warmed to this city as I have to others, but I find it hard to recognise either this place or the UK as so utterly awful. According to this dubious survey, Britain has the worst quality of life of 10 European 'developed' countries because:
2nd lowest sunshine
shortest holidays
below average spending on education
fourth highest retirement age
third lowest spend on healthcare
petrol, alcohol and cigarettes cost more than the European average
life expectancy is a year or so shorter than Southern Europe.

Some of this is clearly negative: who wouldn't want longer holidays and shorter working lives? And yet this is hardly something that's been inflicted on us: the British people have repeatedly voted for governments which go round boasting to investors that we have the 'most flexible' employment laws in Europe, by which they mean the lowest wages, weakest employee protection and worst pensions. Tony Blair used to sing this from the rooftops. I can only conclude that the British are selfless masochists.

However: it's too crude a measure. It's often not how much you spend, but how you spend it. The USA spends massive amounts more on healthcare per head than the UK, yet 25% of the population doesn't get even basic healthcare. 62% of American bankruptcies are caused by medical bills. The NHS, by contrast, might be a bit scuffed around the edges, but we're all equal in its eyes (until the government's new plan is passed, and then we're all Americans).

Petrol, alcohol and cigarettes cost more? Good. If cheap fuel, booze and fags constitute 'quality of life' to these people, then they need beating around the head. If the opportunity to fill your children's lungs with smog, while drinking and smoking yourself into a wracking, cancerous death is your idea of having a good time, forgive me if I don't take much account of your opinions.

Why are these things expensive? Because as a country we've decided to tax them more heavily. Perhaps to stop you doing it so much (and again, Scandinavia is way ahead of the UK on this one), and partly because you selfish bastards won't vote for higher income tax, so we put it on your filthy habits. This seems like a good thing to me. I'd extend the principle. I'd tax adults who buy skateboards, BMXs and baseball caps, for a start.

Finally, 'the 2nd lowest sunshine in Europe'. For me, this is the clincher. It's one of the reasons I love Britain so much. My Irish heritage has given me the pastiest of skin tones. 5 minutes in the sun and I have the complexion of an embarrassed ladybird, but generations of cutting peat in the rain has made me waterproof. Very few things are more pleasurable than tramping up a Welsh mountain on a biting winter's day, or forging through a dark-green field in Shropshire. Not for me the searing, baking heat of the Spanish plains or an Italian beach. Oh, for a Scotch mist or a steady downpour on a deserted beach. I'd rather take midges than mosquitoes. What could be more quintessentially British than old people munching sandwiches in their car, mournfully staring out on a wind-battered beach as the rain beats on the window. Where's the drama, the existential depth in roasting on a continental plage, knowing that tomorrow, and the next day, and all the days after that will be exactly the same. 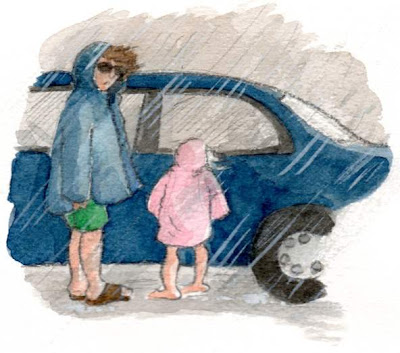 I like the rain. I like watching it beat on my windows. I like the crackle of drizzle on Gore-Tex. I love choosing hiking socks and flasks and waterproofs and rain covers and thermal gloves in British outdoor shops devoid of hearty, tanned giants planning their next assault on Mont Blanc. I like the way walkers say hello to each other, as though manners are reinstated once you leave the city limits. Cling-filmed sandwiches and pasties consumed on a dead sheep (twice!) in the rain, before steaming gently in the corner of a remote pub is Britain at its best to me.

Finally, in defence of Britain: the pork scratching. Need I say more?

Email ThisBlogThis!Share to TwitterShare to FacebookShare to Pinterest
Labels: quality of life, UK

I dismissed this survey as soon as they mentioned sunshine as a positive. How I loathe the sun. I'm sitting in it now; uncomfortably hot, eyes squinted, skin itchy, slight headache...