OK, Edgar Allan Poe isn't immune to humour: anyone who's seen The Simpsons' sublime version of 'The Raven' will readily admit to that. 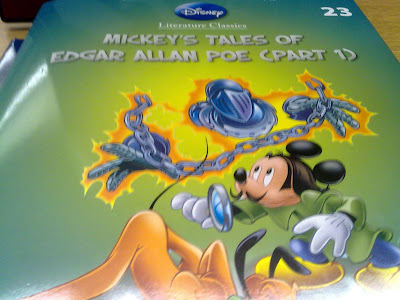 But this really got to me. It's not just that Mickey's the grinning face of a cold, grasping capitalist machine with its roots in anti-semitism and anti-trades unionism: what corporation isn't? It's that to Disney, nothing's off-limits. There literally isn't a facet of any culture which can't be animated, airbrushed and turned into cutesy, safe, schmaltz.

I might have to buy a copy of this literary waste product just to see what they've done to one of the most depressive and obsessive authors in literary history to make him child-friendly. He wrote science fiction, detective stories and above all, macabre tales of the uncanny. Now I find Mickey quite disturbing on a number of levels - but I'm not sure that's what Disney is getting at.

Perhaps it's their mutual interest in children: Poe married his wife when she was 13. She died at 25, he made it all the way to 40.

Happily, however, there is a link between Poe and a mouse, though I'm not sure this apocryphal story is one Disney will be trumpeting.

One day, after school, Edgar found a mouse, which he showed to his friends. His friends took hold of the mouse and forced Edgar to watch as they grotesquely tortured it. Horrified, Edgar ran home and sat on his bed, overflowing with anger and despair. His new kitten kept bothering him until he'd finally had enough, so he attempted to kill the cat.

EEEeeeeewwwwww! The Disney book that is.