I watched England in the World Cup for the first time this competition. Obviously many better qualified people than I am will explain how exactly these players managed to lose 4-1 to Germany, but I was surprised. During the Premiership season, we're constantly being told that they're world-class, and sometimes they demonstrate it - but on yesterday's evidence, they're nowhere near Germany, Brazil, Argentina (poor Mexico), The Netherlands and several other teams.

Update: if you want a depressing explanation of why good people are turned off English football, read this excellent and worrying piece by Benjamin.

Here's an explanation for England's 'phantom' goal, sent to me by a German friend who isn't gloating. No sir. Not one bit. No way. 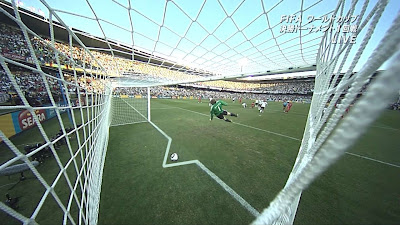 Sorry about your loss, I actually felt bad for y'all. That phantom goal could have made all the difference in your game, you would have been more pumped from that point on had that been a goal that counted.

Don't worry though, today is going to be 'poor Chile' day. If we win against Brazil, I will probably go crazy and shave my head.

Not me, I'm Irish! I was neutral to pro-German.
Hope you do well against Brazil, but it's a tough proposition. The USA were very impressive this year too.

I enjoyed the game. I'd rather watch a game where England lose heavily to a far superior team than watch a scrappy, tight 1-0 win over countries commentators patronise. I also have family who don't remember me in Germany so it was a win win situation.

Chile are a very good side. Them and Paraguay were my my outside tips to do well. Sanchez is an outstanding prospect but as everyone will know Chile's success is mainly down to West Bromwich Albion's tremendous Gonzalo Jara. Saying that, I hope they lose 'cos I've filled my fantasy team with Brazilians.

I love my Chilenos, we're a little dirty but we are definitely fighters. However, I know my place, Brazil is amazing and is one I will be cheering for once we're out.