Lord Chesterfield and me 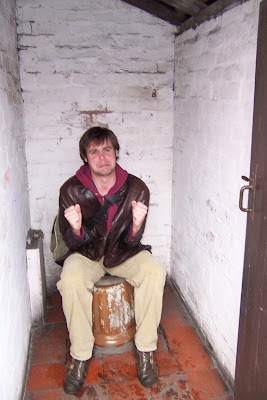 Someone has stolen Neal's book
I don't have a lot in common with Lord Chesterfield, though I am an admirer of his Letters to his Son.

One thing I do share with Lord C. is his understanding that the best place to read is not the library, nor the sofa, but the lavatory. Much of my best work has been done there. After all, why waste time? Lord C. read all of Horace's work on the porcelain: I tend to take along whatever I have in hand (no pun intended). If I'm deep in the book, I don't want to break the spell.

The genesis is years of living in shared houses: it's the only place you can get any peace and quiet. If you're at your desk writing a PhD thesis, nobody thought twice about barging in to watch TV/moan about their current partner/borrow some pants. Locked in the magic, symbolic space of the bog however, and you're safe for a while. No inane conversation, no distractions. This guy thinks that reading on the toilet is an escape from the pressures of family life, or a Freudian desire to distract oneself from the shame of having bodily functions at all, but I'm not sure I trust a man who a) created a 'destination bathroom' and b) placed books in there to suit the decor (although books 'do furnish a room', as Anthony Powell titled one of his many novels).

Could anything be more smug than this?


The bathroom of two publishing insiders who wish to remain anonymous could be called “Shrine It Up,” since all 46 of its books were written by people the couple know

I once kept all my Calvin and Hobbes books in there, until we realised that queues were forming, especially when he held parties. Nobody could leave it at one page - they'd read the whole volume. Most antisocial. Not that I'm innocent - I once attended a friend's party to discover that she kept a stack of feminist SF by the throne: hours of entertainment. And, apparently, very good for the books: I once read a piece claiming that the glues used to hold cheap paperbacks together need moisture to prevent the books falling apart.

However, reading in the loo has a proud heritage, as this article reveals: Henry Miller, amongst others. He read Ulysses there, which - if you know the novel - seems entirely appropriate, containing as it does the first known novelistic defecation. Of course, before the advent of toilet paper (one of the most environmentally destructive products of our age), reading material had a further purpose… one to which the Daily Mail is uniquely suited, as it comes pre-smeared in excrement. I put that bit in deliberately because I read recently that the Daily Mail and General Trust employs a web consultant whose job is to present the editor with a digest of what people say about his paper. I assume that this is the worst job in the world, similar to being the bloke who told Hitler (whom the Mail supported) that the war was lost.

So, the Friday conundrum: what's the perfect bogtime reading? (Nothing shit…) I propose a new measure by which books should be judged: the Bog Standard. If it's no good, it gets flushed. If it detains you longer than bodily functions strictly require, it's a winner.
at 14:47

I either play on my iPhone (not a euphemism) or read Baseball Prospectus whilst on the loo.