Last night saw the verdict on the Knox/Sollecito (yes, an unphotogenic male was in the dock too) appeal against their murder conviction. (Disclosure: I have absolutely no opinion on their guilt or innocence).

As you might expect, the British tabloids were out in force. Especially the Daily Mail, which must have been wracked by the configurations of fruity girl and black man may have murdered a British fruity girl. Still, it's all good photographs.

The Mail left nothing to chance. Pressed by tight deadlines, they prepared two versions of the story… in advance. Then they posted the wrong one on the internet, leaving us to marvel at how a journalist can write an eye-witness account of something that hasn't actually happened, complete with made-up quotes from a range of people: 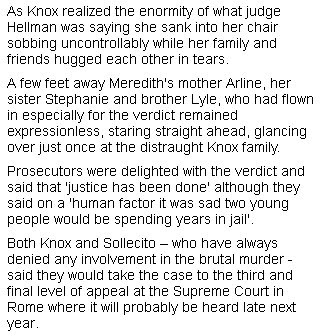 and things which didn't happen: 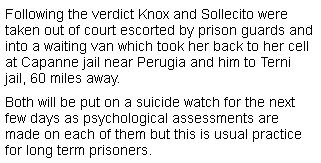 Preparing an either/or article ready for tight deadlines makes sense, especially for the print edition of the Mail, but this was the web, and making up quotes is unforgivable: how do we know that the quotes used in the real story aren't made up too? And all those in every other Mail article. It's not as if they don't regularly lie to their readers, for instance here, here, here here, and here, to mention just one story (links in reverse order).

See also the Daily Telegraph's use of made-up names for county cricket and other sports reports, to make it look like they actually had reporters there rather than simply reprinting newswire copy.
at 11:17