The most disgusting pervert on the internet

I just got a notification from Flickr about another user 'favoriting' (I know, it's not a verb, and it's missing a 'u') a picture I took. Oh goody. Perhaps one of my beautiful landscapes? Or one of my fencing action shots? 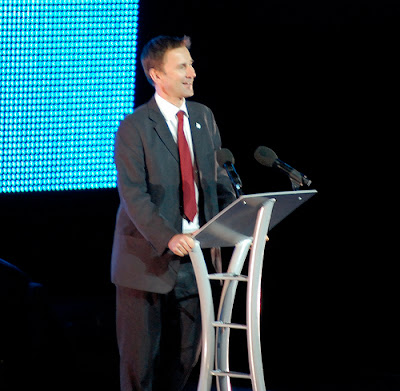 This is Jeremy Hunt, a man so unpleasant that even a Radio 4 presenter made the obvious slip, live on air. He's a Conservative Party minister. I took his photo - in the dark, at a distance, hence the poor quality - at the UK School Games. Oddly enough, his boring speech didn't mention his government's abolition of the event.

Delving into the users' profile, it seems that he or she seems to have some deeply perverse obsession with rightwing British politicians. Haza610: unless you moderate your desires (perhaps bestiality is a step up the moral ladder for you), you're blocked.