Sorry about that, peasants

This fascinating map tells us about who's wrecked the environment, and who's going to suffer.
As you might expect, green is for the people (us, basically) who've caused utter devastation, and blue is for those who are going to sicken, starve and die. Predictably, countries who've contributed least to climate change are going to sink beneath the waves, while those who've poisoned the globe are going to be fine.

That's capitalism, folks! Bye Bye Bangladesh. Who needs the Solomon Islands anyway (except for Solomon Islanders, and I'm sure they can swim)?. In your face, India! That's the point of being rich. Western companies are already buying African farmland from corrupt governments. When the seas rise, we'll always be able to afford the higher land. Makes you proud, doesn't it? 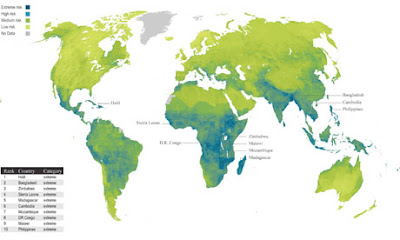 I remember seeing this map a while back in a report I read, I think done by some sort of independent consultancy. It’s a climate change vulnerability map, vulnerable people that is. If I remember rightly they had a number of weighted factors, so for example although the Australian climate will be massively affected, it’s small population and relative isolation means less unrest and its wealth and resources mean that if it acts wisely it should be able to adapt, like by building some desalination plants. As you say it looks bad for India and Bangladesh, massive populations, disrupted monsoon, melting glaciers etc. China and SE Asia pretty bad too. It will be interesting to see how the Chinese react. I wonder in the future if they’ll go for unilateral geoengineering.

No information here about where the GHG emissions came from though Vole. Interestingly England is quite blue compared to other parts of Europe, I guess due to the high population density. Quite a useful map if you’re considering emigration. Prince Edward Island looks good as does Ireland. Time to invest in a few acres of tundra?