Steve Reich, the American composer who with John Adams and Philip Glass defined minimalism is 75 today. He's one of the composers who has filled my aural universe since I was 16. I've played his music when I've been happy, in the depths of misery and in every condition in-between.

Until I was in my late teens, I knew very little about music other than the mainstream classical and religious stuff my parents listened to, mostly on the radio. They had three cassette tapes: The Best of Vaughan Williams, which they shared, and my dad had U2's Greatest Hits and The Best of The Dubliners for the car (can you see a theme emerging?). I still adore Vaughan Williams, but revile the other two. Without pocket money (I know, get out your violins) and with employment difficult out in the countryside, my exposure to music depended on friends.

By sixth-form, I'd heard and liked REM, and I'd acquired a 1950s cabinet stereo from a skip: this one, in fact: 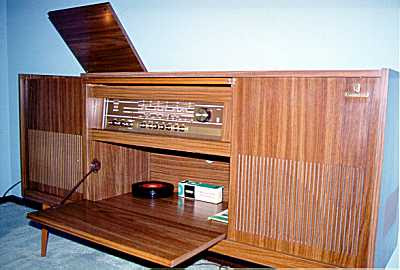 Before I upset the school authorities and got sent to live in a dormitory with the 13 yr-olds (so much for child protection), I had a tiny bedroom-study. Once the stereo was installed, the door would only open wide enough for me to slip in - affording me security and peace, both in short supply at that place. The trusty Grundig provided me with the two constants in my life since: indie lo-fi from John Peel and Mark and Lard's Evening show on Radio 1, and Radio 3's weird late night stuff. Steve Reich appeared on both channels, thanks to the electronica kids getting into Reich's early work with sampling.

The effect was magical: from classical music being painful warbling, I discovered a world of weirdness, experimentation and rigour. I'd always thought classical music meant pretension and prettiness, but this stuff could be harsh, atonal and relevant. I soon got into lots of other composers (Turnage, Matthias, Wilson, Penderecki, Beamish, Maxwell-Davies and many more), but it started with minimalism's paradoxical compression of huge emotion into repetition and tiny changes over long periods. It's music that requires both concentration and relaxation at the same time, if that makes any sense. Either way, playing Reich took me far, far away from where I didn't want to be - and still does.

So Happy Birthday, Steve Reich. Here are some pieces by him. I'd love to post Philip Glass's Two Pages for Steve Reich, but there's no decent version online.

Family Guy's tribute to the wonderful It's Gonna Rain (which basically invented sampling):