I came across this cartoon today. It's by Syd Hoff, a talented artist who also published communist satire in the American Daily Worker, under the name A. Redfield.

Lots of his cartoons are shockingly apposite for now: he often depicted fat, rich upper class people failing to understand the plight of the poor during a savage recession, or even claiming to be 'all in this together'. But this one caught my eye because - and I know this is a bit radical for a blogger - it's something I know about. 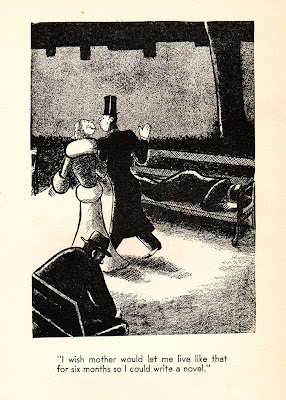 The humour in this is pretty much limited to the narrow circle of Communist Party literary theorists. It's certainly referencing Orwell's The Road to Wigan Pier and other similar texts, but it also marks a decisive (and rather unfortunate) shift in Communist Party cultural policy (the CP, unlike most parties, genuinely thought that culture was important. The point here is that around 1927-1932, disappointed with the failure of the middle-classes and 'professional' representatives of organised labour, such as the Labour Party and trades unions in the UK, the CP decided on a policy of confrontation, known in the USSR as Proletkult.

Culturally, this meant becoming hostile to the sympathetic work of middle and upper-class authors, such as Orwell and others. In particular, the term 'proletarian' becomes a term of abuse. At first, 'proletarian' referred to any sympathetic fiction about working-class lives, but with the Class Against Class phase, any material by non-communist non-workers was automatically tainted by the aroma of class tourism: quality and intention became far less important than political allegiance. Two novels I wrote my PhD about, Lewis Jones's Cwmardy and We Live are praised in the Communist press in the 1930s for not being proletarian - i.e. not patronising work by non-worker, but the authentic voice of a real miner - though how accurate that was is a matter of considerable debate. Well, I debated it, anyway.
at 13:35