Looking for the new Ada

It's Ada Lovelace Day. She wasn't just the proud possessor of a most euphonious monicker, she is the founder of computer programming.

She only lived to be 37, but packed so much into this brief span. Imagine Peaches Geldof winning a Nobel Prize for Physics: Ada's achievements are as astonishing as that would be, for her father was poet and infamous rake Lord Byron, who abandoned her mother when Ada was a month old. Quite understandably, her mother Anne determined that Ada was not going to grow up like her dissolute, arty father, and crammed her head with mathematics, despite the common view that girls couldn't (and shouldn't) count. Needlework, proficiency on the piano and refined manners were all that a Lady required, and when one's social position is threatened by separated parents (see Edgeworth's Patronage for a discussion of this), intellectual achievement is another nail in one's coffin. 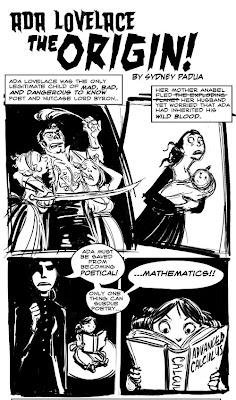 Nevertheless, Ada thrived, even inventing a flying machine on paper, but maths really did it for her. Meeting Charles Babbage, inventor of the Difference Engine, the first modern computer, transformed her life at the age of 17. He recognised her genius and together their correspondence explored all fields of mathematics and other sciences. When Babbage went into partnership with Louis Menabrea to design his Analytical Engine, Lovelace's translation and massive additional Notes to Menabrea's work laid the groundwork for modern computing by articulating her realisation that the Engine could - given specific inputs - be used to compute any complex function - even music.


Again, [the Analytical Engine] might act upon other things besides number, were objects found whose mutual fundamental relations could be expressed by those of the abstract science of operations, and which should be also susceptible of adaptations to the action of the operating notation and mechanism of the engine . . . Supposing, for instance, that the fundamental relations of pitched sounds in the science of harmony and of musical composition were susceptible of such expression and adaptations, the engine might compose elaborate and scientific pieces of music of any degree of complexity or extent.

Was she a retiring, dull sort? Not according to her husband, who destroyed the flirtier letters she sent other men. She was also an alcoholic, opium user and compulsive gambler, though cancer killed her before the booze and drugs.

By night, she and Babbage fought crime, as these contemporary engravings depict. 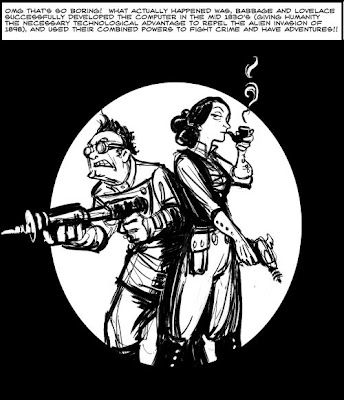 So who are the new Adas? In computing, the Gates's and Jobs's grab the limelight. Carly Fiorentina doesn't count: she's a horrible reactionary greed head rather than a programmer or scientist. The TV is full of pretty young male talking heads - yes, Cox, I mean you - but there must be a wave of XX inventors out there. Surely?
at 10:37