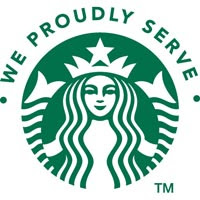 That's the slogan in my building's coffee outlet. It's accompanied by the logo of a well-known American firm, though interestingly the name doesn't appear anywhere other than on the copyright notice printed on the piece of cardboard that's meant to stop you burning your hands on the cup.

So somebody's more 'ashamed' than 'proud'. Which is curious in itself.

But the phrase itself is curious. 'We Proudly Serve'. It's vaguely militarist of course - I could imagine the Marine Corps adopting it. Serve is ambiguous: it means at once to furnish us with a particular brand of coffee, but also forces the workers and franchisee to smile through gritted teeth as they become the bonded labourers of coffee capitalism.

It's part of a new phase of capitalism too. Remember the 'choice' agenda? It moved from the service industries into public services. We're told that 'choice' will now ensure good schools and hospitals rather than concentrating on making all of them good. Instead, Virgin and Serco will compete to give you a choice of straitjackets and catheters, just when you may be wishing you could just dial 999 and go to the nearest hospital. 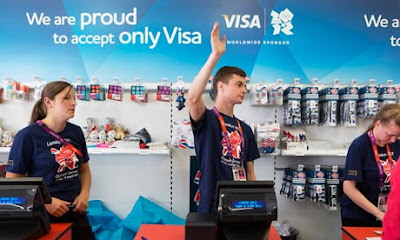 Conversely, business has rediscovered what governments are abandoning: monopolies. 'We Proudly Serve' is part of a re-branding of monopoly. This summer, thanks to a commercial deal, only Visa card holders could buy Olympic tickets. Once at the venues, the cash points were covered in decals reading 'We Are Proud To Accept Only Visa' and the shops refused all other cards. Rather than the rhetoric of choice covering the grim reality, the single word 'Proud' now works as two fingers up to the consumer. Use our product or get out. It shows us exactly how valued we are as customers, of course: 'proud' is just an extra little insult that reminds us that our wishes are at the very bottom of the list.

It's humiliating for the workers too. I suspect the Olympics shop workers were on the minimum wage or near. Our catering staff are on zero-hours, low-pay contracts. They don't, quite frankly, give a shit about branding. Why should they be 'proud' to serve one particular corporate behemoth's product? Why, come to think of it, are we 'branding' our café at all. Why not have some self-pride and name it 'Hegemon University Café' rather than importing some second-hand glamour from GloboCorp?