Recipe for the perfect night in

Sometimes, you just need to switch off completely. The other night, the perfect evening consisted of a bottle of home-brewed beer by my friend Pritpal (we're calling it Pritpale), a CD of George Formby songs (amazing how many of them are about seeing people naked or being seen naked: I'm sure there's a conference paper in there somewhere) and a volume of Calvin and Hobbes strips. One of the greatest pleasures anyone can have is introducing other people to such things and spreading the pleasure a little.

Here's a taste of all these delights… other than the beer, thanks to this antiquated internet, restricted as it is to text, images and sounds.

Calvin isn't very Calvinistic, but Hobbes does have episodes of Hobbesian philosophy, as in this strip. He's also been know to describe humanity as 'a good source of protein' and express a love of fast food ('surprised and running' is how he likes it). Calvin is perceptive, sometimes charming, and massively egotistical - which is fine for a six-year old. His Snow Art is both witty and disturbed, his views on academia and the art world are cynical and highly informed, and his snowmen are acutely aware of mortality… especially the suicidal ones.

As for their author, Bill Watterson is a quiet genius. Liberal and often bewildered by the speed, selfishness and shallowness of consumerist society, his strip calls for a Thoreau-esque re-evaluation of the way we live. He lives his principles too: refused to allow Calvin and Hobbes merchandise and retired to paint when he decided he had nothing further to say. Admirable. You may need to click some of these to enlarge.

The duo also has much to contribute to academic writing: we've all felt this way… sometimes about our own contributions, even if it is a reactionary attitude:

He also understands why dumb-asses like Romney sometimes seem more dynamic and attractive than thoughtful politicians:

And of course Calvin is a post-modernist historian: 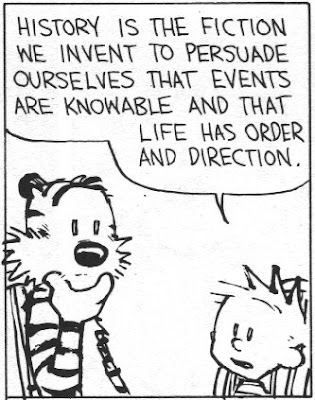 I'm also beginning to understand where Blair got the idea for his downloaded Iraq War 45 Minutes To Doom Dossier (a trick many students still try to pull):

Anyway, you'll have to read the others for yourself. Meanwhile, you'll be needing some George Formby to go with your reading:

This one's the uncharacteristically minor-key (though still saucy) The Lancashire Toreador:

More in character is With My Little Stick Of Blackpool Rock. There's something sinister about Formby's voyeurism/scopophilia but it's all played for laughs in true Music Hall style, and he's the kind of light entertainment celebrity I find acceptable: he was famous for being good at what he did and left it at that. Mind you, his wife Bessy (by all accounts a formidable character) dealt with a racist South African prime minister by telling him to 'piss off you horrible little man', so I'm inclined to like them. While we're on the subject, I'd also recommend Gracie Fields, Max Miller (too filthy to be recorded, apparently), Two Ton Tessie (a Welsh Irish banjolele player) and a whole host of 30s/40s entertainers. They're virtually all from Lancaster - the combination of a culturally confident working class with little interest in metropolitan taste-making, plus Blackpool's power as the biggest holiday resort in Britain meant that there was little pressure to refine accents and tastes… until film and TV came calling.

This is the famous 'When I'm Cleaning Windows' - again, voyeuristic sauce!

and some Tessie O'Shea - check out her playing:

and finally Gracie Fields' 'What Can You Give A Nudist For His Birthday?'