I don't always sit around in my pants shouting at the TV. Sometimes I read books. When nobody's looking, I read stuff most of my colleagues would dismiss as trash. Except Mark. He has 15,000 pulp novels in his house. So jealous.

The other day I picked this one up very cheaply. 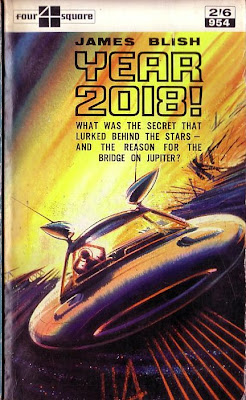 I bought it because a) it's by James Blish who is rather interesting; b) I can't resist books which pick a specific date in the future and c) I liked the cover.

Turns out that it is an interesting book after all. It was published in 1957, and was also known as They Shall Have Stars. Blish was a highly trained biologist who worked in the pharmaceutical industry and also for the Tobacco Institute. Due to Cosmic Justice, he died of lung cancer, but not before publishing a wheelbarrow load of Star Trek novelisations, the Cities in Flight masterpieces and many, many other novels.

Year 2018! is much more than a pulp novel. It's not very well-written, to be honest. I assumed Blish was a British author trying to sound American, given the mish-mash of British terms scattered throughout the novel's otherwise cowboy-hero discourse, but no, he was American so that doesn't explain it. The plot doesn't really hang together - it's a book which wants to communicate a couple of ideas rather than tell a story - and the characterisation is barely more sophisticated than charcoal stick men on a cave wall.

However, the book is interesting in other ways. Primarily, it expresses very clear contempt for Joe McCarthy's anti-Communist witch-hunts - pretty brave in 1957. I don't know if the American edition was more cautious, or whether pulp SF was below the radar of the security state and therefore free to say what it wanted. By 2018, the US is indistinguishable from the Soviets: repressive, security obsessed and moribund. The security state ensures that free-thinking politicians and scientists are hunted down, so that scientific and social development is impossible. The Soviets will soon take over Earth - not that life will change very much - but (and this is where the plot comes in), it turns out that 'Pfitzner' (Blish was employed by Pfizer) has developed an immortality pill.

Blish is pretty happy to accept that Earth's political systems will be wrecked by the development. But there's a solution! Thanks to the subversive activities of a Senator who understands the value of research science for its own sake (now there's a bit of real fantasy), the Americans have also developed an anti-gravity drive ('spindizzy') which enables intergalactic colonisation when allied to the immortality pill. All this is bundled up with the construction and decay of a massive pointless Bridge on Jupiter (yes, in 2018) which exists as the space version of Moby Dick in, well, Moby Dick - they build it because they (just about) can.

So off they go… but if you're thinking that this ends up being yet more Into the American West in space, you'd be mistaken: the chronology at the end depicts a future in which humanity eventually becomes enfolded into a higher race's universal civilisation: Blish's concerns are science, reason, skepticism and a fairly healthy degree of cynicism about human society.