You might think I have little in common with Superman. And you'd be right. I used to have a skinny-fit Superman t-shirt (worn with a degree of irony, I should add), but I rapidly stopped being skinny and unlike Comic-Book Guy, I surmised that this wasn't a good look.

Now, however, Superman and I are colleagues. He's quit his job on the Daily Planet and become a blogger, after becoming frustrated by the limitations of print media. In particular, according to this report, the authors see Clark Kent as a man alienated from his profession by the relentless cheapening of newspaper journalism. Ironically (that word again), this occurs in the pages of a comic book. Actually, it's not ironic at all: comics have been addressing the big issues, including the erosion of the public sphere, for years.

It's a sad moment: newspapers made comic strips, and now comic strips have cast off newspapers, even though we're only talking about fiction. The point about Clark Kent being a journalist was that he was fighting for Truth and Justice in his suit and day job just as much as his alter ego was in external underpants and cape. He, Lois and Jimmy were heroes of a relatable sort, fulfilling the professional demands of their vocation. But when we think of journalism now, we don't associate it with the investigative derring-do of the Guardian or the Sunday Times Insight team (RIP): we see a bunch of sleazy blokes hacking into phones in pursuit of seedy sex scandals. We imagine Daily Mail drones putting together another set of prurient, skin-crawling euphemisms which make it OK to leer over an underage girl or a celebrity doing something outrageous like not wearing mascara. Clark's an old-fashioned guy in the best sense: he sees newspapers as part of the public sphere, holding power to account - something American and British newspapers have singularly failed to do in recent years.

I hope Clark Kent's wrong. But he's not the first fictional journalist to move into the blogosphere: Doonesbury's Rick  Redfern is finding it hard going: the Huffington Post and such sites are notoriously exploitative and still don't have the credibility associated with a newspaper (click to enlarge) 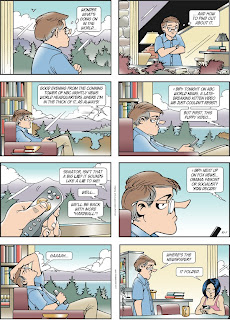 Mind you, if you think it's hard for the dispossessed journalist, what about the effect on us? I certainly wouldn't want any of you to depend either on partisan news channels or even my efforts in the field for enlightenment. (Click to enlarge). 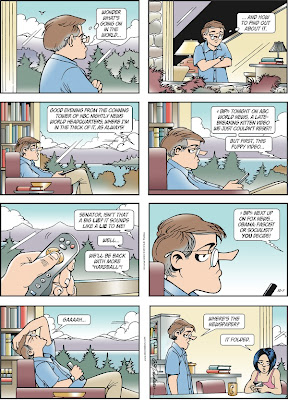 Blogging is important: I've pursued the egregious Grant Shapps and my local excuse for an MP, Paul Uppal, because I don't have institutional responsibilities - I'm not spending anyone's money and I don't have a deadline, but it's no substitute for a press card, an editor and a budget. Despite the heroic work of Eoin Clarke et al., we don't have the mass reach, access or credibility a decent newspaper still possesses.