Away from the Tories and Jew-haters…

After taking a seminar in which one lad matter-of-factly stated that press campaigns against Jews should be allowed because 'Jews run the world', I want to smash my head repeatedly against the desk, or think about other things.

Like books. I want to blog a little more often about the books I'm reading if only to demonstrate that there's more to my life than coping with anti-Semites and making malicious complaints about innocent Tory MPs. So here goes.

This weekend, I read Claire Kilroy's The Devil You Know. It's a fast-moving satire of the insane Irish property-and-debt boom. The principal characters are Tristram, an alcoholic representative of impoverished Anglo-Irish Old Money, and Dessie, a fast-buck local builder. Aided by M. Deauville, Tristram's AA sponsor and mysterious financier, they rapidly move from being cowboy builders to international speculators, with the inevitable and familiar result.

The novel's strengths are its boldness in (almost) naming names: the corrupt builders, financiers and politicians are identifiable to anyone who has read a recent copy of the Irish Times; its clear-eyed analysis of the cultural path which led to Ireland's current state, and its beautiful writing. The passage of a pint of Guinness from the table to Tristam's lips is a virtuoso exercise, and there are uncountable funny bits too. I liked the line that to be a local 'your mother had to be from your father's side of the family'.

The novel's weaknesses are primarily those of the plot. The title and M. Deauville's name rather given everything away from page one, and I'm not sure this twist does anything other than proclaim that it's more than a 'state of the nation' novel, it's a work of Literary Fiction. The quality of the writing does that: this weak and obvious twist actually subverts the author's otherwise firm grasp of narrative - as though she's ashamed to be writing in a realist form. Relax, Claire.

It's well worth reading - as are all her others.

The other book I started is one of Ben's rejects, I, Vampire by Jody Scott. He didn't think much of it, but I'm enjoying it, despite having zero interest in tales of the undead. The strapline ('Can a Seven Hundred Year Old Transylvanian Find True Love With A Revolutionary Rysemian Fish-Woman?') and cover artwork are enough: a stylish vampire and a freshly-bitten Virginia Woolf, not a standard horror approach. There's also an introduction by Theodore Sturgeon, a thoughtful and interesting critic and SF reader himself. 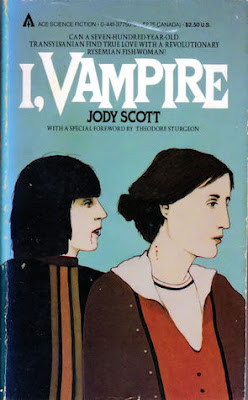 So far, our unapologetic vampire (who is also unapologetically turned-on by both the human Virginia Woolf and the fish-alien currently posing as the gloomy modernist) has explained that the roots of modern society is capitalism's penchant for preying on the inadequacies, loneliness and desperation of humanity in a way that is in fact less honest and straight-forward than her own need for a few ounces of blood now and then. It's a genre send-up, but it's also thoughtful, political, witty and very stylishly written. Recommended (so far).
at 19:15