Morning everybody. Lots to do today in my new guise as a fully-functioning researching and teaching machine. Ahem. Never mind that both this morning's dissertation supervision students are late for their appointments…

The plan for the day is a) finishing taking notes on Alan Plater's Beiderbecke trilogy for a joint paper. Done! Then I'm going to be reading more on nineteenth-century travel writing for a paper I'm doing on George Borrow and O M Edwards - must stop reading and start writing at some point. I'm also teaching Media, Culture and Society, though it's tempting to think that one new concept is probably enough for some of these students. I also have to contact all my union members, organise a class trip to a reading which may or may not collide with some visiting speakers, and and and there's definitely something else, but at this point my brain is leaking out onto my corduroy shoulders so, you know, whatever.

However, I do recall the weekend with some clarity, which for me is quite an achievement. Firstly, the nearest (in age, of five) sibling got married in New Zealand. I'm assured by text messages that everything went ahead so congratulations to them both. Secondly, I went to a concert by the magnificent CBSO in Symphony Hall. On the programme was some Weber (fun short overture), Bruch's First Violin Concerto, and Tchaikovsky's 5th Symphony. The Bruch was glorious 19th-century virtuoso stuff - new to me as I tend towards the 20th century, but lovely.

Here's Yossif Ivanov, the soloist. His playing was magnificent, and the tone of his 1699 Stradivarius (the Lady Tennant) was just stunning. Though I have to say that when he turned up with a goatee, a Mao shirt and long waistcoat, I was strongly reminded of Little Britain's deluded hypnotist ('look into the eyes, not around the eyes, into the eyes; and you're under'). 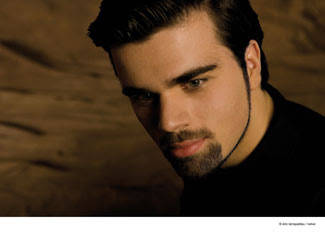 Then after the interval was the much more substantial Tchaikovsky - aside from a slightly drifting third movement, it was stunning: powerful, moving and beautifully played.

and the Bolivar Orchestra playing the fourth movement of the Tchaikovsky: