Life in a university is exciting. It's stimulating… intellectually. There are also isolated cases of romance - or lust - blooming: last year several of us had to interrupt a young student couple who thought that meeting rooms were ideal trysting venues.

But life here is much more sedate than popular culture would have you believe: 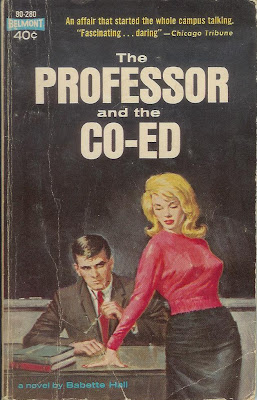 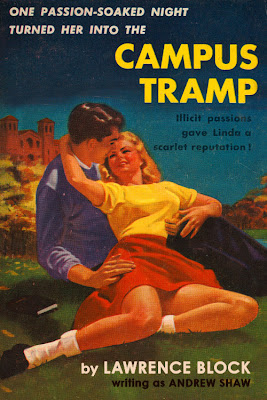 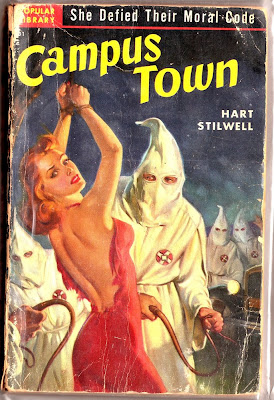 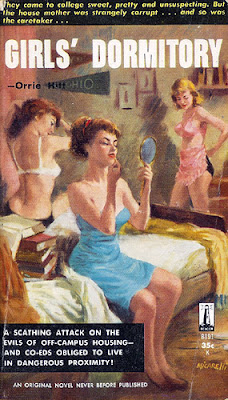 Pulp novels are fascinating. They cover Westerns, SF, race, war, and obviously sex. The covers alone are often stunning. But they also tell you so much about the culture in which they appeared. Take this last one, Girls' Dormitory. Who's the audience? You'd assume it's heterosexual males, but Katherine Forrest's study Lesbian Pulp Fiction and Duke University's Sallie Bingham Center collection both suggest that this pseudo-moralising (see the bottom left of the cover) allowed gay women to develop a sexual identity completely closed to them in real life. This is presumably why gay publishing imprints have revived some of the 'classics': used to reading 'against' or 'between the lines', their readers easily ignored the moralising, and it's easy to see how these emotionally heightened, sometimes ridiculous texts were enfolded into camp culture as an ironic reclamation of lesbian and gay identity.
I don't know what proportion of pulp novels are set in universities, but it makes sense for the sex-related ones: residential institutions where men and women, and same-sex relationships can develop away from the prying eyes of disapproving adults must have been at a premium in more conservative societies (prisons are another popular choice). The moralising banner allows the reader (probably not students or teachers) to believe that such places - from which they are excluded -  are hotbeds of vice: an unattainable fantasy for the 97% of the population which would never attend college in those days.
This seems to have been an all-American fantasy though: campus fiction in the UK is usually comedy based on nerd-characteristics, the pursuit of power and the mad scientist. Academics are seen as socially inept and divorced from reality, students as privileged, arrogant, spoilt, naive or silly. Perhaps this is due to Britain's postwar history: America's students moved thousands of miles, didn't seem to work too hard, had big cars for romantic trips to the lookout, had white teeth and good weather under vast skies. Britain's students had rationing, rain, mackintoshes, bad teeth, couldn't get more than a few hundred miles away, and lived in cold, cramped conditions. Try making a fantasy out of that!
Pulp fiction still exists to some extent: for some reason railway stations specialise in soft-porn novels, though I'd hate to sit next to someone reading one, but the social and cultural contexts have changed to such a degree - particularly the end of censorship and the rise of the web - that it's harder to sustain this kind of sensationalist, titillating market. Certainly universities have had their erotic potential drained: there's no mystery when almost 50% of young people are students, and many of them live at home, or attend their local university.
While this leering stuff isn't much to be missed, the narrowing of students' horizons certainly is: there's little scope for reinvention, escape and encountering new social groups and interests if you commute to and from your family home every day, and meet your schoolmates in lectures.
And with that, I'm popping a piece of 'Bacon Bits Chocolate' (oh yes) into my mouth before heading off home to pursue the life of a sexy academic: reading today's book purchases (Edgeworth's Patronage from 1814 and Neil Postman's polemic Amusing Ourselves To Death: Public Discourse in the Age of Showbusiness).
at 16:24

The most important University in pulp fiction has to be Miskatonic University...

'Academics are seen as socially inept and divorced from reality'
Really?

Bob: ah, Miskatonic. Good old Lovecraft.
Anonymous: Yes. Sorry. At least, that's how my friends and family talk about me. And more widely, most popular culture featuring academics treats us like this. A Very Peculiar Practice, The History Man, Educating Rita, tons of others.

I personally think that Unseen University in Pratchett's Discworld is one of the most accurate depictions of university life you can find in contemporary fictions... /tongueremovedfromcheek

I'm intrigued by the occasional glimpses of Yale campus life in the background of the long running Gilmore Girls, especially the imagined professors. Inspirational, tweedy, eccentric, and above all male. An interesting footnote to this is that in the 1960s, college students were among the studied populations in American sexology, but this raised questions about whether or not they could really be considered a typical population in typical circumstances because, you know, college life ...

I'd love to work at Unseen University. My promotion-by-assassination technique is derived from Pratchett's college.

MfD: I must have a look at Gilmore Girls. Your point about college students extends to psychology too: how many studies (inc. the Stanford Prison Experiment) were warped by drawing subjects from this particular pool?