OK, I said some things about rioting yesterday. And now an angry mob has trashed the betting shop next door and the derelict restaurant beneath my flat (follow #wolverhamptonriots). 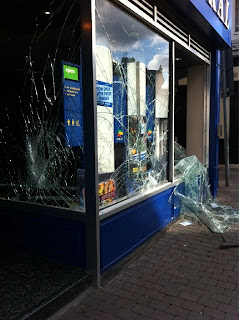 Photo by Kenny from KicFM: the Express and Star hasn't got anything up despite its head office being less than 50 metres from the riot. KIC's funding is under threat: go figure.

If you're reading this, rioters, help yourselves to the olives, but please leave the books and records alone.

In all seriousness though, the original cause - the shooting of a man - has been left far behind. We're into the realms of mass psychology. A soup of causes are behind this: pent-up frustration at 'authority', aimlessness, a paucity of proper political outlets, social decay and some latent aggression.

I see a lot of people are claiming that RIM Blackberries are somehow to blame - rather than Twitter or other media - and wonder why that might be. OK, Blackberry Messenger is supposedly encrypted, though you can bet that the police have full access to them. The real reason is very simple: Blackberries are given out free to teenagers on mobile phone contracts to tempt them away from iPhones. Blackberry Messenger is free, whereas Twitter requires a more expensive contract. That's how you can guess the age and economic background of the rioters.
at 18:03

I don't think these are a group of people frustrated at a lack of a political outlet. Neither is this due to poverty, the welfare state means that no one in this country is so poor that criminality becomes morally acceptable.

I know it's terribly unfashionable, but these are people who have had it easy, they are use to a 'me' society and think that they can take whatever they want. They are scum pure and simple. The only thing going on in their heads is whether to nick a watch or a iPod.

Perhaps in Ireland the full extent of this is not apparent but the messages I'm getting from friends and family in south London is that the government are playing this situation way too softly. People are scared and are having their livelihoods destroyed by spoilt little brats in burberry.

Express & Star have lots of photos now and a full report that shows the extent of the mindless stupidity that went on in Wolverhampton yesterday.

One of the first thugs in court in London is a 31yr old teacher!

The aforementioned E&S also had lots of photographs of angry white people too!