Meet Sir Hugh Orde, former chief constable of the Police Service of Northern Ireland. Now he's head of the Association of Chief Police Officers, which sounds like a public body but is actually a rich private company with privileged access to government and policing.


Now that's bad enough. But naughty Hugh has been wandering the TV studios dressed like this: 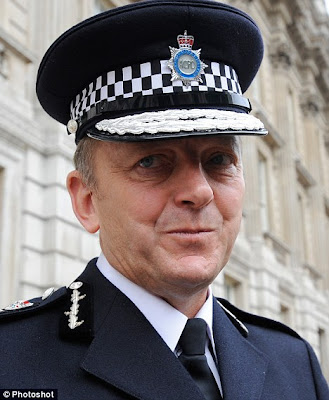 Perhaps someone should have a quiet word. Impersonating a police officer - by, for instance, getting the Met to run up a fake uniform reminiscent of their own senior brass, then sticking an ACPO badge on it - is a criminal offence:

Section 90 Police Act 1996 (Archbold 22-62) creates several offences relating to the impersonation of police officers or the possession of articles of police uniform, namely:

Hugh is touring the studios in a deceitful uniform in pursuit of the Met Commissioner's job. That looks like an offence:


Where the impersonation involves a threat to the safety of any person, or to property, or is done with a view to financial gain, then a prosecution should follow.

I share your irritation with this. But, I couldn't help myself, I had to look up the legal position. The Police Reform Act 2002, s96 states that the president of ACPO continues to hold the rank of Chief Constable. So, strictly speaking, Sir Hugh is not impersonating a police officer - he still is one.

However, custom and practice has led past presidents of ACPO to retain the uniform of the Force/Service that they have left. In most cases, this is uniform of dark blue serge, and most ex-presidents have retained the cap badge of their previous Force. Sir Hugh has not. This may be for a couple of reasons:

1. The PSNI, of which he used to be CC, has a uniform of military green - not blue. He may consider that to appear in such a uniform may confuse the public, himself, MPs or members of the public into thinking that the army has 'been called in'. This would not be good.
2. By appearing in a uniform similar to that of the Metropolitan Police, he may be trying to show how good he'd look as Commish. More likely, I feel.

But the badge - oh the badge. Now that just says that he can use Dymo and Photoshop.

I'm not sure 'holding the rank of' and 'being' is necessarily the same. I'd like to know whether he has a warrant card, and can therefore arrest anyone.

Yes, he does. The Law says that he "continues to hold the office of constable", which means that he continues to be a sworn officer with a warrant card.

The "office of constable" denotes that he holds full police powers.

Well, that's one mystery cleared up. Good sleuthing! Thanks.