Are you, or have you ever been…? 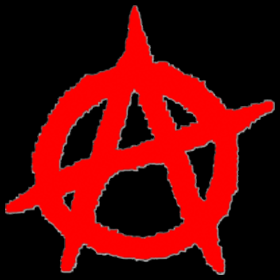 One very disturbing report today highlights a Metropolitan Police briefing that members of the public should report anyone they think harbours 'anarchist' beliefs.

We'll leave aside that fact that anarchists haven't committed any notable crimes since 1910, and that was dubious: the Siege of Sidney Street featured some politically connected men - the most notorious of whom may never have existed - but they were essentially burglars.

In fact, it strikes me that most of the political and terrorist crimes committed in the history of humanity have been in the name of organised ideologies of left or right. Despite the evasions of Melanie Phillips, Fox News and Co., the Norwegian massacre was committed by a man with an internally consistent rightwing ideology nurtured by their hysteria.

Anarchism - the concept that humanity is naturally co-operative, and therefore does not need states and governments (there are left and right versions) - might be simplistic and idealistic, but it's rarely violent. All the anarchists I've met have resorted to the method of plying me with nasty cider and bad weed, in corners of student parties. Rarely have I felt the social structure to be under threat.

It's also not illegal. Nor is fascism, communism, or extreme religious world-views. That is - or rather was - the point of freedom. You can think what you want. It's when you impose that position on others using coercive methods that you become a criminal. Obviously there are real-world limits on this: the UK is currently bombing Libya's government for being oppressive while selling weapons to Saudi Arabia to help it behave oppressively, but that's an argument for another day.

The basic idea is this: you can't legislate for thought, though you can educate. But now the police have decided that anarchists are a threat and should be investigated simply for their thoughts. Who's next? We know that environmentalists are already spied on. Socialists? Liberals? Meanwhile, Breivik and his British allies - who view violence as a cleansing, healthy thing per se - carry on bombing.

I know who I think is more fundamentally threatening to democracy: a police force, lacking responsible oversight, which arbitrarily sets limits on political thought. Perhaps that's what comes of dining too often with the News of the World.

Ironically, the sight of the cops singling out anarchists for thought-crime neatly demonstrates one anarchism's central tenets: that states always become oppressive, whatever their intentions. I don't entirely agree: only capitalist and pseudo-communist states inevitably degenerate in this way, but the Metropolitan Police are doing their best to make it certain.
at 12:15