My door is always open…

We - like most academics - have 'office hours': periods when we're guaranteed to be available on a drop-in basis. Not that most students take most notice of them: I've had calls late in the evening, and people dropping in at 8 p.m. wondering why colleagues aren't there.

The timing of office hours is always a matter of cunning strategy. I personally favour early morning on Monday and late Friday afternoons: Mondays have the added advantage of catching the bank holidays (always something to bear in mind when teaching duties are handed out too). I heard of one person here - well before my time - whose really weird crack-of-dawn 35-minute 'hours' turned out to be planned around the commuter flight to Berlin, where he was moonlighting in a second job!

I assume that in their imaginations, we're the Borg, waiting in our regeneration chambers when not actually lecturing. After all, we couldn't possibly have lives, could we? (Actually, I don't, and I generally do sit in my darkened office for extended periods, in some kind of stasis). 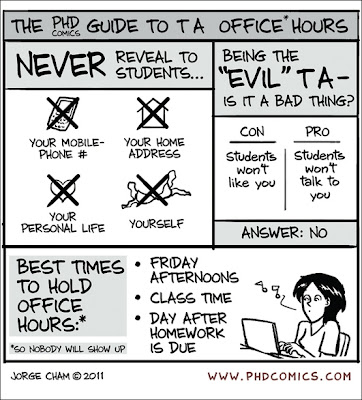 (TA = teaching assistant: postgrads who do all the real work in American universities)
What happens during office hours? Usually, nobody comes. Then the day before an essay is due, a queue will form. They will say things like 'could you go over it again'. I'll say 'what?' and they'll reply 'the last 6 weeks' lectures'. Some will express shock that you think they should read books rather than just cut-and-paste my Powerpoint into Word.
The other group of punters are those who turn up with a draft essay 4 weeks early. You read it in awe, then spend an hour explaining to them that yes, they've got everything right and they're well ahead of everybody else. These people are guaranteed to return every week to have their hands held because they lack the confidence and encouragement to realise how good they really are. The really arrogant and self-confident ones are the ones who fail. When I was teaching Study Skills, the only guy who came every week for a tutorial was a mature student who'd worked in PR over in Oman for 20 years. Once you'd cut out the advertising adjectives from every sentence, you were left with genuinely impressive insights into everything he touched. Only he never believed it and came back week after week for three years… Luckily, as well as being touchingly modest, he was also hugely interesting, so seeing him was something to look forward to every Thursday.
at 16:29

So true - all of it. I actually quite like the ones that turn up week after week, it makes me feel that there's a point in my being there.

I've also noticed that a couple of my less confident students question whether or not they have dyslexia, in spite of the fact that what they are writing is very good, and gets decent marks.

The ones that make me fed up are those who demand a comprehensive reading list of journal articles, cases and books that they can use in their essays - and only those. When I suggest to them that this is what research is about - finding your resources and making decisions about using them - they either look at me blankly, or tell me that they've paid their fees, and therefore should be provided with this information as a matter of course - including a list of relevant quotations. Inevitably, their request comes between 3 and 5 days before the essay deadline, and ignores the fact that they have already been provided with a reading list for the whole course.

Yes, there is a core who are deeply resentful when we point out that they're not buying results. Then of course there's the plagiarists and the Google Books crowd…

Just a moment of curiosity from the southern hemisphere. Given that "usually, nobody comes", what are the reasons that you're given for maintaining the tradition? The office consultation with the kindly prof seems to belong to an vanishing era in higher education, the kind that really only still exists in college movies. Can you offset the hours spent on email against the requirement to maintain your lonely vigil?

Ey up lads, they've rumbled us!

I'm afraid so. It's really easy to spot when a person quotes a line - out of context - from an edition they can't possibly have found. That's not scholarship, it's data-mining.