Oh dear, I may be in trouble

Classroom management is fraught with danger. Nobody wants to be like a schoolteacher, but some things really get on your nerves:


Frank J. Rybicki, assistant professor of mass media at Valdosta State University, did the equivalent last week when he shut the laptop of a student who was allegedly web surfing as opposed to taking notes. She filed a complaint (reportedly about a finger or fingers that were hurt when he shut the laptop) and the university’s police arrested him on a charge of battery. The Georgia institution suspended his teaching duties there, although not his pay.

Reached on the phone, Rybicki confirmed his arrest and suspension, and said that he had been told by the university to not answer questions about the incident. He did say that the article and comments in the student newspaper, The Spectator, were accurate. The article quoted students who saw the incident as saying that Rybicki closed the laptop amid an argument with the student over his view that she had been on websites not related to the course.

Rybicki is accused of actually hurting the student's fingers - something the other students don't believe.

In my first year of teaching, I once collected everybody's mobile phones in a bag and returned them at the end of the class. This was 2000, so it wasn't that many. It seemed to amuse everybody and did the trick for the rest of the term. I also vaguely remember answering somebody else's mobile during my lecture and telling them that the student was busy. But perhaps that was a dream: I'd never do that now.

So what to do? It's normal for phones to go off now, normal for people to text their way through a lecture or seminar. Classroom web access is useful in many ways - checking facts, seeing if a book I mention is in the library - but it can be hugely disruptive. I know it annoys other students, which is the major problem, not my feelings. 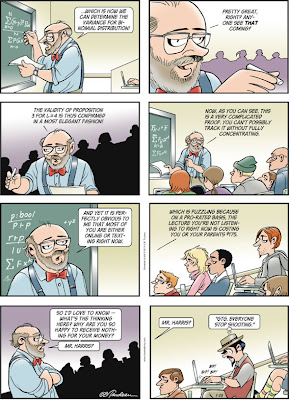 The question is, what to do? I roll my eyes, make what I think are humorous comments, but what I'm really thinking is this: why bother turning up? Most of the texters are those who haven't read the books, don't want to join in the discussion. Others are engaged but really don't understand that their concentration for those couple of hours should be solely on the matter at hand. Part of the answer, of course, is to make my classes more interesting…

"Does anyone know these people? Do they exist or are they spooks?"

I've had similar conversations on this matter with you and the Head of English in recent months, I believe. I'd love to just throw all phones and iPods out of the window before staring down every member of the damn class before retaliating my desire to have a successful lesson... or else. But as you say, this wondrous dream is fraught with mere hearsay of hurting students & behaving ‘professionally’ even when our superiors do not. And not to mention fanatical that any of the students would not run out of classroom to rescue their BlackBerry.

Another measure must be conceived before the dawn of 3D era is upon us and students will be glued to their phones projecting the latest in cinematic brilliance, at least to their minds whilst you and I, Vole watch Sunset Boulevard.