Well that was one of the most joyful 90 minutes of my life as a Stoke fan, of which there aren't many. We've just beaten Bolton, who usually play attractive football, 5-0 to get into the FA Cup final for the first time ever, and better finishing would have made the score even higher.

Somehow it feels wrong - Stoke fans aren't bred for success. We're used to spending Saturday evenings in post-defeat gloom and Mondays soaking up the abuse of our 'friends' and colleagues. I remember the days when Port Vale (!) had the local bragging rights… I wonder where they are now. Anyway, all this means is that we'll be too tired to win the matches we need to survive the Premiership, and we're merely postponing defeat until the final. No. That's the old mentality. We're going to win everything from now on. Ahem. 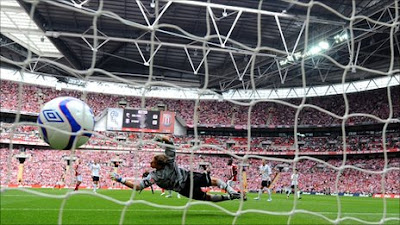 I didn't know you were a Stoke supporter Aidan. That was one of the most one sided games that we'll see in an FA Cup Semi-Final for some time.

Do you ever go to watch them?

Ah yes. Many years. My office noticeboard has a hamemr and sickle poster, some Welsh poetry and the front page of the Sentinel from the day we were promoted to the Premiership. Sums me up!

Congratulations! Here's hoping they beat city in the final.

Good luck in the Final - you're going to need it!