Yesterday was the 50th anniversary of Yuri Gagarin's flight into space: a wonderful achievement for itself, and a key moment in the cold war - hence the Russian determination to celebrate it so heavily this year: they got there first and they're still flying reliable vehicles on a regular basis, whereas the much better-funded American manned flight programme is in all sorts of trouble.

The Space Age is over: it was never much more than a bit of super-power posturing, which is a shame. I'm an avid science and science fiction fan, and would love to see us ruining colonising other planets and becoming a galactic civilisation, but the fact is that the distances are too huge, the dangers too great and the rewards too few: there aren't any habitable planets in a million years' travel unless we manage to break all the laws of physics to develop warp drive, which we won't. Extra-orbital space is for machines and information collection. The romantic in me wishes this wasn't the case, but the pragmatist tells us to fix this planet rather than dream of others.

I bought this Soviet-era print a few years ago: a beautiful, whimsical celebration of the 10th anniversary of Gagarin's flight. Hope you like it. Click to enlarge. 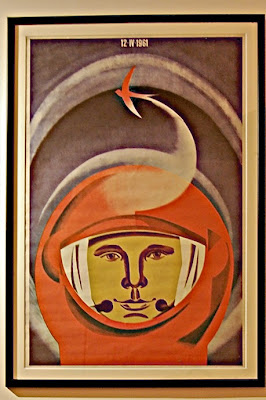