I agree with Nick. For my overseas readers, this is an ironic echo of the 2010 UK election, in which the Labour and Tory leaders found themselves using the phrase every time Nick Clegg, Liberal Democrat party leader, said something reasonable. This was before it turned out - to everybody's surprise - that the multimillionaire financier was just another smooth-tongued liar. But that's another story.

I agree with Nick about the upcoming referendum on the UK's voting system. The choice is between the current first-past-the-post (meaning that if there are three candidates in a close race, you can get elected with 30% of the vote) and Alternative Vote, in which you list the candidates in order of preference. If nobody reaches 50% on the first go, the last place is eliminated and his/her voters' second choices are counted. And so on.

Nick described AV as a 'miserable little compromise', which is true. We both want Proportional Representation, as they have in the Scots and Welsh parliaments: it gives you a house of representatives exactly matching the wishes of the electorate.

However, AV will do for now. Anything that the Tories oppose is a good thing, I find. David Cameron's wandering around shouting that extremist parties will win big with AV, which is a lie. We can test this.

What side are the Nazi British National Party on? 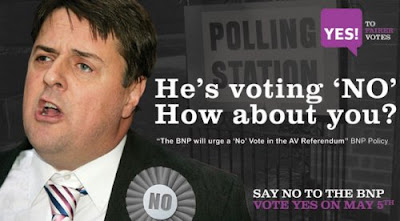 Oh dear. Seems like they agree with the Conservative Party on this, as with so much else. If you ever want to know whether something's a good idea or not, see what the BNP are doing, and vote the opposite way.
at 19:23

I'm very "meh" about AV - bigger issue is getting people out to vote rather than fiddling with the voting system.

That leans me towards voting No, however the fact that the BNP and the Tories are voting that way makes me think Yes. I must just not bother. Not many will, I reckon.

I should say that I agree with Nick Clegg, not Nick Griffin, though both are leaders of tiny parties with no appreciable support in the country who've managed to achieve more prominence than they deserve.

I do think a fair voting system is important, but you're right that turnout is a problem. However: it went up a lot last year because people were really motivated. If AV helps to make everybody's vote count, rather than just those in a handful of marginal constituencies, then more people will vote.

The people I despise are the ones who don't vote and then moan about the government.