The Last Supper - with nachos

I adore Chris Parks' rendering of the Last Supper, using luchador wrestlers and Mexican food. It taps into the skateboarding subculture beautifully, and the Mexican aspects are spot on, evoking that culture's much more emotional approach to Catholicism. I was brought up in Irish and British Catholicism: a lot of silence and shutting-up. Hispanic, especially Mexican Catholicism is much more dramatic, whether it's the festivals or the misery (partly because it's a cover for pre-Christian activities too). I don't think I'd believe in God if religious practice had been more fun, but I might not despise it quite so much: 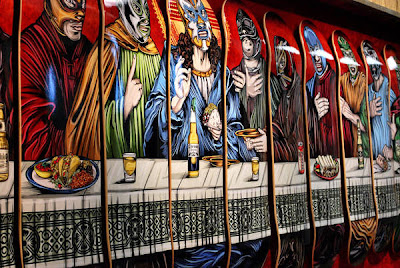