I got some books in the post today. What am I typing? Of course I got books in the post today. Marina Warner's From the Beast to the Blonde: On Fairytales and their Tellers (after being wowed by her visit last week) and Sam Leith's mathematics fantasy The Coincidence Engine (you can tell a good bit of nerd-lit by its use of 'engine' instead of 'machine', in homage to Babbage). This is what the Mythopoeic Society says about Warner's book:


Seldom does one find a book with such an impressive scholarly apparatus that is such a pleasure to read, partly because the author’s enjoyment of her subject is so pervasive and contagious. Anyone who is interested in fairy tale, legend, and such underpinnings of the mythopoeic imagination would be well rewarded by From the Beast to the Blonde.

But I also received this gadget, the Chef'n Garlic Zoom, which I expect is a gift from Imaginary Friend, after I admired her one. 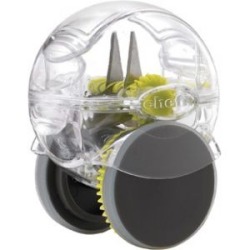 Anyway, you'll have a break from me tomorrow. I'm off to Sheffield to do a site inspection for the UK School Games: I'm the Welfare/fencing representative. So in honour of Sheffield, some music from that city:

The sainted John Shuttleworth, here in his youthful guise as Jilted John:


And a track from Pulp's totally underrated Separations album: