Old MacDonald had a farm

Perhaps you think of farmers as rosy-cheeked, benign guardians of our natural glories. All the animals have names and are dispatched with a pat and a tear. Birds sing in the hedgerows and muscly young men and women gather in the harvest with a song. 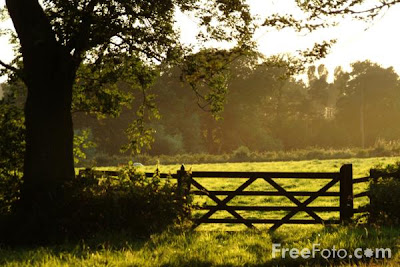 Not me - I grew up in the country. Bar the hill-farmers clinging on in poverty, farming is one of the nastiest businesses out there. Massive swathes of the country are devoted to monoculture (reducing biodiversity). Most farmhouses are empty or rented out to commuters: there aren't many farmers left because huge corporations own the land, while the actual work is sub-contracted out to mobile businesses paying immigrants shamefully low wages to move around the country. The animals are stuffed full of drugs to keep them docile and germ-resistant (not the same as being healthy) and the fields are green deserts. The real crops being farmed are taxpayers' subsidy cheques. They're not going to the remaining small farmer to maintain an ancient culture and eco-friendly rural idyll: they're going to massive global corporations like Tate and Lyle, Cargill and even to some of our government ministers.

As to the birds - forget it. Farmers shoot, trap and poison anything that moves unless there's a subsidy cheque attached to it.

Don't just believe me - let's hear what the outgoing conservation head of the RSPB has to say:

A leading green campaigner has sparked a row over the cause of declining wildlife in the UK by accusing farmers of being "fundamentally anti-environment."

Mark Avery, who last week left his post as director of conservation at the RSPB, also says environment ministers have brought little knowledge or enthusiasm to their jobs, attacks successive governments of "muzzling" state agencies meant to protect wildlife, criticises global "over-consumption" in a Guardian article on Wednesday that looks back on 25 years at the charity. Avery attacks "conservative" farmers for what he sees as their failure to reverse the massive population declines in farmland birds – numbers are now at their lowest levels in England since formal attempts to record them began in 1966 – before criticising the body that represents them in England.

"at almost every opportunity, the [National Farmers Union (NFU) ] chooses the option which will harm the environment – it is weak on greenhouse gas reduction measures, in favour of biofuels, argues against improving the effectiveness of farming grants, is against clamping down on pesticide use and wants its members to carry out what will be an ineffective cull of badgers.

"The NFU lacks a coherent view of what the future of farming should look like except that the cheques must keep coming from the taxpayer."

What does the NFU (which really only speaks for the mega-farmers) blame for the massive decline in bird numbers?

I'm now stroking my chin in the internationally recognised sign of disbelief. Millions of tons of pesticides, hedges ripped out and monocultures, versus some dog-walkers.
at 15:00

I have to agree. The last Film Studies class of the year; a chance to watch Minority Report on the big screen and chill out a week before the exam. Half the clas could not be bothered to attend. They've had Easter off, visited the family, gone clubbing, but no, they still don't care. They may think twice when they £8500 invested, but I doubt it.