Hysterical liars of the week

Check out this front page, from the Daily Express (the paper that even the Daily Mail thinks is barking mad): 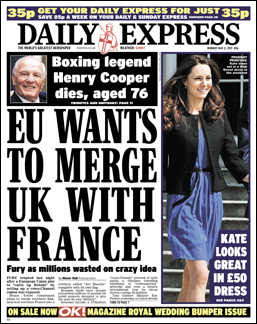 
FURY erupted last night after a European Union plot to “carve up Britain” by setting up a cross-Channel region was exposed.

Senior Tories condemned plans to merge southern England and northern France into a territory called “Arc Manche” complete with its own flag.

Brussels chiefs have already earmarked millions of pounds for lavish projects designed to give the zone its own “identity”.

It's simply an hysterical bit of utter rubbish which - shamefully - appears to be dictated by a Conservative Government minister in the run-up to the local government elections. Propaganda of the very worst sort - ruined only by a) being lies and b) the Express's plummeting readership. This sort of stuff is why the British press has such an awful reputation.

The Communities Secretary said: “Labour ministers have been caught red-handed conspiring with European bureaucrats to wipe England off the map and replace our historic boroughs, counties and cities with transnational Euro-regions.

It's an infrastructure and tourism idea - the EU hasn't got the right to merge countries! I notice too that in the 'minds' of Pickles and the Express, 'southern England' and the UK are the same thing - as I've long suspected. As is traditional with this kind of 'journalism', we get several paragraphs of confected outrage from weirdo extremists (Douglas Carswell, Nigel Farage, the Tax-Evaders Alliance), before we reach the shocking truth about this fiendish Euro-plot: far from being:

a series of cycle routes seeking to link northern France and southern England… a £2million travelling exhibition of “contemporary” artworks and even a bizarre international tour by circus clowns costing £5.5million

However, I have news for the Express and for the Conservative Party. There WAS a serious plan to merge the UK and France (again - let's not forget that under the Normans England and the bits of Britain it controlled were outposts of Normandy, and the Plantagenets claimed to be Kings of France and Britain).


The final "DECLARATION OF UNION" approved by the British War Cabinet stated that:

France and Great Britain shall no longer be two nations, but one Franco-British Union. The constitution of the Union will provide for joint organs of defence, foreign, financial and economic policies. Every citizen of France will enjoy immediately citizenship of Great Britain, every British subject will become a citizen of France.

So which traitorous nutter wanted to declare an Act of Union between Britain and France, in 1940? Why, it was that dangerous Europhile, winner of the Charlemagne Prize for his contribution to the European Ideal, advocate of a United States of Europe ("We Must Build A Kind of United States of Europe" - Zurich speech, 1946) and, er, Conservative Prime Minister and war hero, Winston Churchill!

And that's not all: another Conservative PM, Anthony Eden, considered it again, in 1956!

Let's see what Pickles and the Express have to say about that…
at 15:51

I for one would quite like to be Frenglish. Think of how astounding our football team would be...