Very tediously, the US state department accused the Russians of selling attack helicopters to Syria. Obviously, it's revolting that any country should be helping that regime kill its civilians.

But let's not think for a second that Hillary Clinton has suddenly become some kind of peacenik. This isn't about principle: it's about realpolitik and tactics. It's a sales dispute. Let's just have a look at the countries to which the UK sells arms in the area. 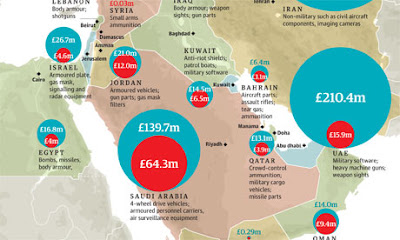 This is the 2011 report. It involves £500m sales to Iran. £200m to Saudia Arabia (which used UK military equipment to help the Bahrainis to crush the democracy movement), £70m to Israel, which ruthlessly crushes dissent in the occupied territories, lots to the previous dictatorships in Egypt, ammunition to the Syrian regime, and lots of other sales to the whole panoply of vicious dictatorships which sell us oil.

Talking of Bahrain, I wonder why the US had nothing to say about 70% of its population being denied any kind of political or economic freedom. Oh yes, it's because it's the main port for the US Navy fleet in the area. Which is why the US is still selling the regime weapons.

Like the UK, the US sells (and often just gives) weaponry to all these deeply unpleasant states. It's partly to keep the oil flowing. It's partly Keynesian economics: even US-funded weapons keep Americans in employment. It's also an economic trade-off which makes the flow of oil money to the East look slightly less imbalanced, and it's to some extent a trade-off for persuading these countries not to invade Israel… another recipient of American military largesse. The economic case is becoming more and more important, as these arms lobbyists and analysts demonstrate:


"US defence companies are definitely looking overseas as a market opportunity that may offset some of the reductions in the US military budget that almost everybody expects to be coming down the pipe. The supply is there coming from the companies, but that doesn't change the fact that there is also demand."
Brian Finlay, the director of the Managing Across Boundaries programme at the Stimson Centre in Washington, noted that US defence companies had formed a powerful lobby that has risen in prominence during the economic downturn.
"We're seeing arms producers across the country, and interests across the country really coalescing to form a pretty significant lobbying bloc, and to complete the perfect storm this is also happening at a time of fiscal restraint and a wider economic downturn here in the United States."
"Jobs are pretty hard to come by, and jobs that are available in these industries pay pretty well. They're good jobs. It makes it even a more potent political issue for the administration."


When nobody's buying cars, sporting goods or whatever else keeps an economy afloat, death's the only expanding market. There's always demand for things with which to kill people, and if demand does drop, you can always stoke up a little regional tension. Look at Greece, a country with no enemies but a vicious rivalry with Turkey, and spend over 4% of its budget on weaponry, the highest percentage in Europe. If they stop spending, you can expect Labour, Tory and Lib Dem MPs with military factories in their constituencies to start begging for Greece to be bailed out. Peace is very bad for the economy.

Arabs: our country needs YOU to go out and die for our marginal constituencies.

Everyone's a winner. Yay for democracy. When convenient.
at 10:31