A roundup of inconsequentiality

OK, what have I been up to since last you drank in my limpid words?

I met my friend Adam, shortly to take his wedding vows. He asked me to read some John Donne at the service (presumably not Donne's own wedding poem: 'John Donne / Anne Donne / Undone' - his in-laws didn't approve) and we drank beer. Then I went to meet my new-born nephew. He seemed as tranquil and engaging in my arms as a fairly tame rabbit, but did cry rather a lot for the rest of the evening. And night. Still, all very delightful.

The next day, I had the pleasure of another Olympics training day. The expense and inconvenience was not soothed by the discovery that somehow I hadn't been registered, and that I'd done the same course - sans Olympics, Burger and Chocolate logos - before. Ho hum. Insult was added to injury by the announcement that the uniform included a man-bag and baseball cap (St. Morrissey would strongly disapprove), and that I am now the proud holder of a City and Guilds qualification in Not Hitting Children And Vulnerable Adults from… McDonalds University. I sat next to another academic, and we had a few choice words for all this. Still, this fine painting hangs in Hackney College: 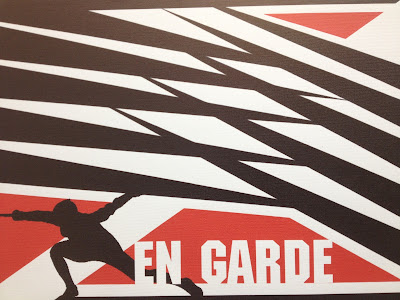 Anyway, enough of this nonsense. I cleansed my intellectual palate afterwards by a trip to the British Museum, where I gazed in awe upon Europe's oldest book, St. Cuthbert's Gospel. It was made around 698 and buried with St. C. Despite that, the handwriting is more legible than anything I have ever put down on paper. I also saw a Shakespeare First Folio, Milton's notebook (he wrote in three languages, sometimes changing mid-sentence), Austen's notebook, and the first handwritten pages of Angela Carter's Nights At The Circus. And loads of other incredibly historic texts too. But my brain's too small to remember.

While I was there, I filmed this rather astonishing artwork - Patrick Hughes's Paradoxymoron:

Congratulations on your nephew. (think I already said that, but still). I like the choice to do Donne, but don't read the Flea either. I love it, but not very suitable for the occasion.

Thought in between: Something is very wrong in the world when McDonalds has to us we shouldn't hit children. Where did common sense go?

Love the Paradoxymoron, thank you for filming. Pictures propbably wouldn't have shown the effect in this case. Will definitely check it out the next time I'm in London.