Last night, I went to a public lecture at The Hegemon by Constance Briscoe, the leading lawyer, judge and author of Ugly and Beyond Ugly who fought her way up from an horrifically abusive childhood. I use the word 'fought' deliberately: her presentation was combative, outspoken and aggressive. Much of it was thrilling - she encouraged black people, and women in particular, to be ambitious and ruthless in pursuit of their ambitions. She also condemned the tyranny of low expectations and - most of all - attacked black women's 'racist' tendency to drag each other down or, when successful, to pull up the rungs of the ladder behind them. Tough stuff, and the audience - mostly black and Asian women - responded enthusiastically. 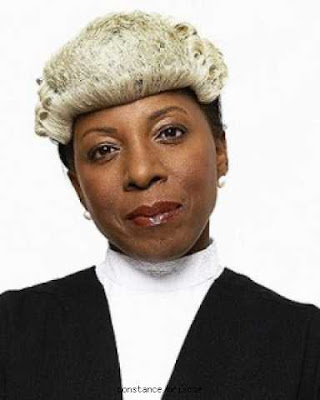 I suspect there's more to Briscoe's story than she allows: her attack on the three black women who held her back contained the seeds of a political dispute that she didn't explore. Briscoe relentlessly personalised her story - no room for structural or wider political/social concerns, and her solutions are rooted in self-help. She constantly recited the mantra that self-belief will achieve success, something I associate more with tearful talent show winners. Despite this, she made it very clear that - just to be sure - she sent her kids to Westminster (£31,000 per year, George Osborne) and St. Paul's (£30,000 per year, Nick Clegg) schools, amongst the most exclusive and expensive in the country. When she attacks others for pulling the ladder up behind them, I wonder if this crosses her mind. Similarly, the extensive plastic surgery she's had suggests that at the very least, cultural judgements do affect her: far from rejecting her mother's taunts about her ugliness, she appears to have accepted them.

Most appalling was her relentlessly reductive sense of vengeance and her definition of success. To beat your enemies, you had to rise higher and earn more. Of the three black women who tormented her, she said they 'never did anything good… not one of them became a judge', which is a rather insensitive thing to say to a crowd who are unlikely to become judges either. Worst of all was her career advice: 'don't go into criminal or family law, there's no money in it. Go into contract, property and financial law, that's where the big money is. If you want to do something good for society, make a load of money first then see if you still want to'. Much of what she said was very good for The Hegemon's students: she repeatedly made the point that massive amounts of hard work are necessary, for instance.

Briscoe was engaging, honest and frequently funny. She feels she has a mission to expose truths about black people which aren't 'politically correct', as she kept saying. Her personal story is horrifying and redemptive, yet she's ultimately intellectually incoherent. Lacking any real ideological or structural awareness, her solutions are little different from the junk-psychology of the airport self-help variety, while her obsession with money is - while perhaps understandable, psychologically - socially destructive.
at 11:49

I have read both of Briscoe's 'misery memoirs' and I know that they are well received by black women themselves. I do agree with your analysis, and the fact that Briscoe appears to be money orientated above all other career decisions. She mentioned the radical 'barristers' of the 80s in her second book, and how their earnings were pooled and then shared equally - she did not like this arrangement and did not stay long.
You call Briscoe intellectually incoherent, obviously I was not at the talk, but I wonder if it is her lack of emotional intelligence that you in fact picked up on. For someone who has a counselling background it appears that Briscoe has more work to do on her personal 'healing' which she covers up with these 'inspirational' talks.