Marvel at the arrogance!

Kevin Pietersen is an England cricketer, formerly captain of the team and well-known for his lack of self-deprecation, shall we say. He's almost as good as he thinks he is.

He was born in South Africa and switched allegiance because he didn't like that country's attempt to turn cricket from a whites-only sport to a mixed one by reserving places for black team members.

There's an argument to be had there, sure. However, if you were a white South African with some previous racial disagreement, would you pose for a doctored photograph reclining in Barack Obama's Oval Office chair? To advertise Brylcreem? 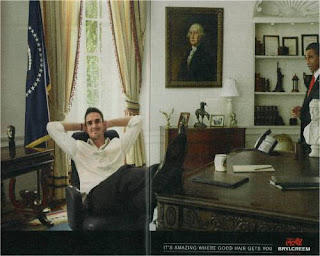 what a dick! (note the well considered, literate reply)

I think that's the level he'd understand. But perhaps we should condemn Brylcreem more than the dumbass in the photo.

The Plashing Vole - making mountains out of molehills since 1965 (not sure on your birth date exactly, but I know I'm close)

Nothing wrong with that ad campaign, in my opinion. Remember that is The Presidents Chair, not Obama's own personal possession.

I think it captures KP's self-indulgent arrogance with a bit of humour, to be honest. I like it.

It's not a huge thing, but a bit insensitive and an interesting choice. Not sure that the president's chair is appropriate for a sports player either. He's just not that important. Weird to use the US Presidency as the reference for a game that's hardly played in the US too.

"He's just not that important" - Yes, that's the joke you see. KP is the type of person who thinks he would be, and it's lampooning him.