To have sex with the ocelot, turn to page 45

At last! The literary world has found room for a contemporary twist on the Choose Your Own Adventure stories, of which I owned several as a young tyke. I can't remember which ones I read, though I vaguely remember Nazis featuring heavily, but I do remember finding them boring and frustrating: 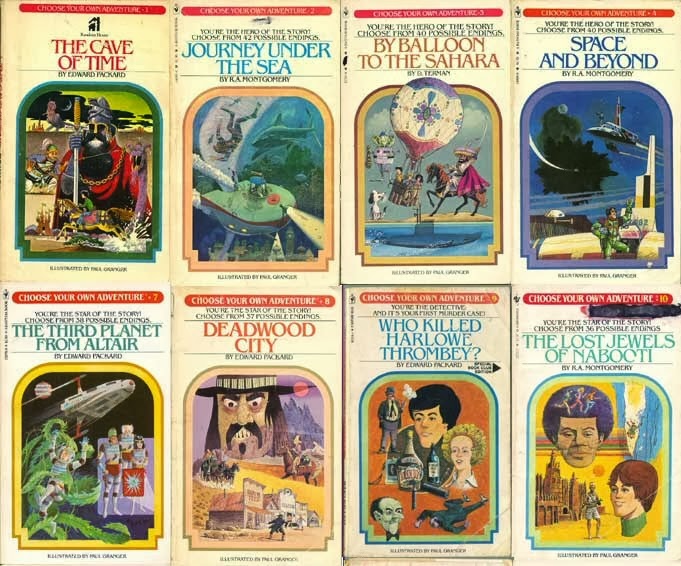 I presume that the books were a response to the perceived threat of computer games, which were beginning to evolve from simplistically teleological (win/lose or live/die) narratives to more sophisticated texts in which simple actions were replaced by complex decision-making. I guess Skyrim is a decent modern version, as the quests can be ignored in favour of exploration to some extent. My favourite computer game, by the way, is this one. You can play it for free, for ever. I have memorised the books and still can't get far. I also used to play Civilization II but gave up once I realised that it was ideologically constrained: it was impossible to succeed by running a peaceful socialist state, and I hate being lectured to.

The other motivation is of course the perception that boring old novels with their starts, middles and ends were incapable of holding a cool 80s kid's attention, too bossy and prescriptive for Gen-X rebels. In this sense, I'd have to say that they were failures. The idea that the reader was 'free' to choose an adventure of his or her own was illusory, and the illusion was brought to the fore by the mechanism. The slim books only held room for a certain number of choices, and in particular of endings. The mechanism of narrative was laid bare in a really boring way for me, though that in itself was educational, I suppose.

Paradoxically, the classic novel affords the reader far more freedom than the CYA ones. The latter are solely about plot: there's almost no characterisation or narrative commentary. Entirely written in second-person ('You reach a fork: to turn left, turn to page 31…'), the destination becomes the only thing of interest and the outcomes were so stark that boredom is inevitable. Where the traditional Bildungsroman would end with the protagonist growing up, understanding society, himself and his place in (or out of) society, the CYA novels would end with 'You are dead' or 'you find the treasure'. Not much room for ambiguity or side plots, let alone allowing the reader to prefer death or not care about the treasure. While established genres have more or less authoritarian narratives, none of them are quite so reductive. Tristram Shandy's black page and the first-person narration of Tristram's own conception, various authors' use of pages to be read in random order, or the seemingly random flow of Ulysses leave the reader with far more freedom of interpretation, understanding and creation than the CYA sub-genre. Even the less experimental texts are implicitly more adventurous than CYA ones. Take Pride and Prejudice and its famous opening sentence:

IT is a truth universally acknowledged, that a single man in possession of a good fortune must be in want of a wife.

So many choices have to be made just by the time you reach the end of this sentence. Your choices dictate what kind of novel you read. Imagine assuming that this sentence is entirely seriously intended. The result is a novel in which the interest lies in getting the rich man a wife and we're just reading for a conservative happy ending in which the rich man acquires his female trophy. It's a romance, slightly undercut by the monetary foregrounding (which makes a 'straight' reading difficult). Let's choose another adventure: let's assume the narrator is being ironic. Just by changing the tone of voice, we have a completely different novel which uses satire to challenge established social conventions. There are other choices to make. Is this an external narrator, refereeing the action and characters, or are the attitudes of one particular character being relayed (we call this free indirect discourse) and perhaps even mocked? If so (and I'd suggest Mrs Bennet) then we have not just a social comedy or satire, but rather a cruel parody of a woman trying her best in difficult circumstances to provide for her daughters. Another possibility is that the text sympathetically explores the precarious situation of young women whose only salvation is in snaring the young man, whether they (or he) wish to or not.

That's not all: as long as Choosing Your Own register and genre, you have all the fun of reading with or against your narrator, picking your characters' clothes, appearance, back-story, preferred fates, accents and a host of other things. A decent book will leave you with lots of space to interpret events, statements, implications and endings for yourself, far more than a CYA novel will.

And what of the new Choose Your Own Adventure novels? Rather boringly, they're Choose Your Own Sexual Adventure texts. Not 'boringly' in the sense of 'middle-class academic takes fashionably dismissive view of sexual content', but boringly in the sense that this was inevitable and will inevitably be entirely reductive and predictable. In one way, sex is the ideal subject for a sub-genre (no pun intended) with the limitations described above. However you look at it, the basic permutations of sex are pretty limited and mechanical, and for men at least, lead quickly to a defined end-point, however one chooses to get there. As Pulp's jaded take on sex and by extension life, 'This Is Hardcore' puts it,

Oh, what a hell of a show but what I want to know:
what exactly do you do for an encore?

The limited nature of the children's versions of CYA books will only be accentuated by the sexual versions. All the readers will know (at least in theory) what the preferred ending will be, and certainly won't be pleased by a realist treatment. Just imagine it:

p. 1. A rich man invites you to stay with him on his yacht. If you choose to go with him, turn to page 3.
p. 3. Your sexual adventure is over in 32 seconds. Your partner claims that this has never happened before and falls asleep. He later wakes up, gets your name wrong and explains that his wife doesn't understand him while ostentatiously looking at his watch. Go back 7 pages and try again.


Your new acquaintance asks you to use some toys and 'sexy' clothes. Do you a) laugh derisively or b) give it a go? If b) turn to page 69.
p. 69. Your partner is snoring loudly. You lie awake in the dark empty, disappointed, unfulfilled and used. Do you wish to try again or browse dejectedly for LOLCats on your phone until sweet oblivion takes pity on you?

Actually, I'm tempted to give writing one of these a go. Although Joe Dunthorne, whom I admire very much, has already written one.

If you think I'm being overly mean, let's have a look at what these books actually do:


"you" are a woman who has been stood up in a swish hotel bar. When a stranger mistakes you for a high-class escort, slips you an envelope full of cash and invites you to his room, the first of many choices begins.

Interestingly, the author decides that some Adventures won't feature:

So: choosing your own adventure starts by asserting a fixed sexual identity: female and heterosexual, with the cash-sex nexus and male dominance firmly established, despite the claims that the female reader at whom the novels are aimed remains 'in charge'. The only choice is between thinly-disguised variations of tired, conventional social positions (no pun intended, once again) with no opportunity for genuine transgression ('You arrive at the zoo. If you wish to sleep with an ocelot, turn to page 45…').

Choose Your Own Adventure indeed! The only real choice is whether to further enrich an opportunist publisher by buying another coil of old literary rope, or retire to bed with nothing other than your own imagination. Or a copy of Ulysses. And my answer to that would be:


yes and then he asked me would I yes to say yes my mountain flower and first I put my arms around him yes and drew him down to me so he could feel my breasts all perfume yes and his heart was going like mad and yes I said yes I will Yes.

Rather than an publishing company attempt to cash in on the fad for computer games, I always assumed these were "Dungeons and Dragons Lite" for people who didn't have dice, geeky friends and figurines. I remember some books at the time even involved rolling a dice to determine which page you went to next.

I never saw the ones which needed dice. I think you're right - there's definitely a D+D element there.