As you know, I've become increasingly concerned with the safety of Paul Uppal MP, who has been missing in action for about a month, judging by his website and Twitter feed.

Good news! He's hard at work writing a report for David Cameron on how to win the election by connecting with ethnic minority voters!

This might seem a little odd coming from a man who once sneeringly referred to the 'race relations circus' when a racist Tory friend of his lost his job, but never underestimate Paul's willingness to change his opinions for the sake of preferment.

Here's what he said, on a blog which mysteriously disappeared when he got elected (shame a highly-educated MP doesn't know what to do with an apostrophe either):


… the McCarthyistic mouth foaming utterances of the race relations industry, which through accusation alone can slay political careers and stifle well intentioned and principled debate. I say this because I have seen with my very own eyes the modus operandi of this circus, employing individuals to perpetuate this climate of political correctness. In reality this industry/business does dreadful damage to Britain’s race relations. It seems more concerned with securing it’s own funding streams and non jobs for it’s membership of zealots. The cost of this is all is so much more than financial, as we lose decent people and gag those who point to the emperor’s new clothes.


Never mind, either, that the Tories have always been disdainful of 'identity politics': when votes are in question, they'll do anything.

Sadly for Lazy Paul, I think he'll find that a) 'ethnic minority' voters are likely to share the same concerns as non-minority citizens: finding a job, keeping a job, decent schools and healthcare, and an honest government working for the good of all. Presumably the Tories have given up on these, and are trying to find ways to stereotype ethnic minorities as somehow sharing Tory values.

In case you're from an ethnic minority and find yourself tempted to vote Tory, remember this racist (and illiterate) Tory poster. One candidate in the Smethwick 1964 by-election replaced 'coloured' with the N-word in his speeches. 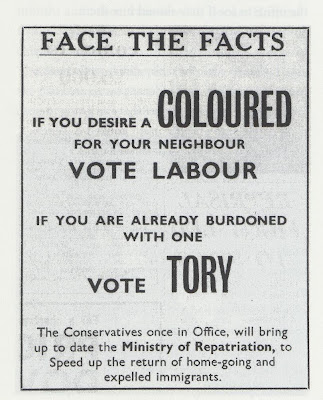 And let's not forget the Conservative Students' popular t-shirt and sticker campaign, which echoed Margaret Thatcher's claim that Mandela was simply a terrorist:

No doubt the Conservatives have improved, but there aren't many ethnic minority MPs, and most of those are in constituencies with large ethnic minority populations: it's almost as though white Tories won't vote for non-white candidates. Hence Derek Taylor and Warsi getting places in the House of Lords rather than achieving election. Then of course there's the Monday Club, the hysterical language used to demonise immigrants, refugees and Romany/Travellers, the Nazi songs sung at Tory stag dos and Tory student parties, and countless examples of golf-club bigotry. Let's not even mention the Tory fury at criticism of the police when Stephen Lawrence was murdered. Boris Johnson described the Metropolitan Police as the 'victims', which seems a little bit odd. But then, he did refer to black people as 'grinning picanninnies' with 'watermelon smiles' (his defence: he was 'quoted out of context', which is what Hitler would have said at Nuremberg). And of course there's the curious Tory decision to leave the mainstream European Conservative grouping and join in with the Polish, Hungarian and other Holocaust deniers. But you don't have to believe me: Conservative Party MP Priti Patel told the Financial Times that 'racist attitudes do persist within the party… there is a lot of bigotry around'.

Paul: if you want ethnic minority people to vote for you, how about this:

1. Fix the economy
2. Stop punishing the poor.
3. Tackle institutional racism
4. Stop bombing their ancestral homes on a whim.
5. Explain why - and then fix - the massive imbalance in non-white unemployment, educational achievement and presence in politics, business and the arts.

He really does spend an inordinate amount of our time worrying about votes.

I wonder if that number keeps him awake at night. We can only hope so.

I hope so too. Though he doesn't actually worry about our votes: he's convinced that he's been the victim of electoral fraud and that the system will save him.

Sadly (for him), his marginal victory was a result of a Labour collapse in turnout. If he can only manage 691 at the end of a tired and discredited administration, he's dead meat as the representative of an even more discredited government. I just hope we get the chance to vote him out, as opposed to boundary changes getting rid of him.