Awesome! Destruction pornography and the loss of empathy

You might know that one of my hobbies is photography: landscapes, architecture, fencing and occasionally events I'm at. While I've never photographed serious disorder or destruction, I can really feel the pull for the photographer.

Today, I've been writing a lecture on Steinbeck's The Grapes of Wrath, a novel which alternates between the documentary and the mythic as it attempts to explain the mass misery of the Dustbowl and the suffering of one fictional family within the fleeing mass, the Joads. I'm thinking aloud about the tensions between the novel form and wider society, about didacticism, naturalism, propaganda, proletarian fiction and bourgeois form etc. etc. I'm illustrating the lecture with a series of pictures from the Dustbowl, particularly those of Dorothea Lange, whose most famous image is a kind of Okie Madonna: 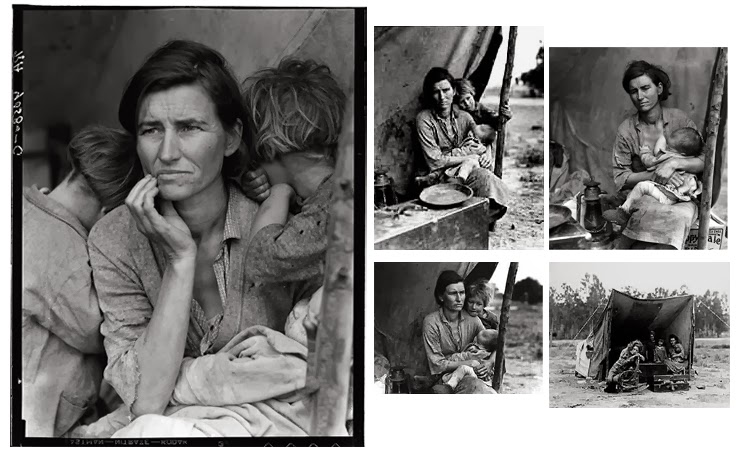 Is this photograph exploitative? It looks posed, to evoke the traditional Christian Madonna and Child, building in all sorts of cultural expectations about gendered expectations, motherhood and maternal emotions. It's a didactic picture to some extent: perhaps we're meant to feel outrage at these people's condition even while we admire her fortitude and beauty.

The lighting is low and natural. Wrecked machines feature strongly, while an abandoned toy or dusty medical implement lies in the foreground.


That Chernobyl one is pretty much the money shot of the urban destruction photographer: a gas mask for an apocalyptic thrill, a child's shoe for added pathos. (That shot, by the way, is from totallycoolpix.com, which tells you all you need to know about the moral sensibility of its photographer and fans). Damian the unscrupulous war reporter in Drop the Dead Donkey always carried around a broken teddy bear and a 'blood-stained plimsoll' for this very purpose.

These pictures are always urban, perhaps because the photographers and viewers get a little frisson from the sense that Western Industrialism isn't – as we were promised – Progress, inevitable and one-way.

Im starting to think there's something entirely decadent about this kind of thing - the idea of taking the photographer's tour of derelict Detroit fills me with horror. It feels like a tour round Bedlam or a colonial trip to the Reservation. Why not just hang about in a funeral parlour or A+E snapping the dead and wounded for Instagram? It's not even difficult photography. Decent SLR, no flash, tripod, prime lens, long exposure and narrow aperture. As to composition: lazy and clichéd. Gerard Manley Hopkins got it right:


Which leads me to the latest twist on this vampiric art. I've been following the reports of Kiev's rebellion through the newspapers and social media. I read the Guardian, which has a particularly brilliant picture editor. There's always something to make me gasp or admire the skill of the photographer. Today's images from Ukraine were no different. 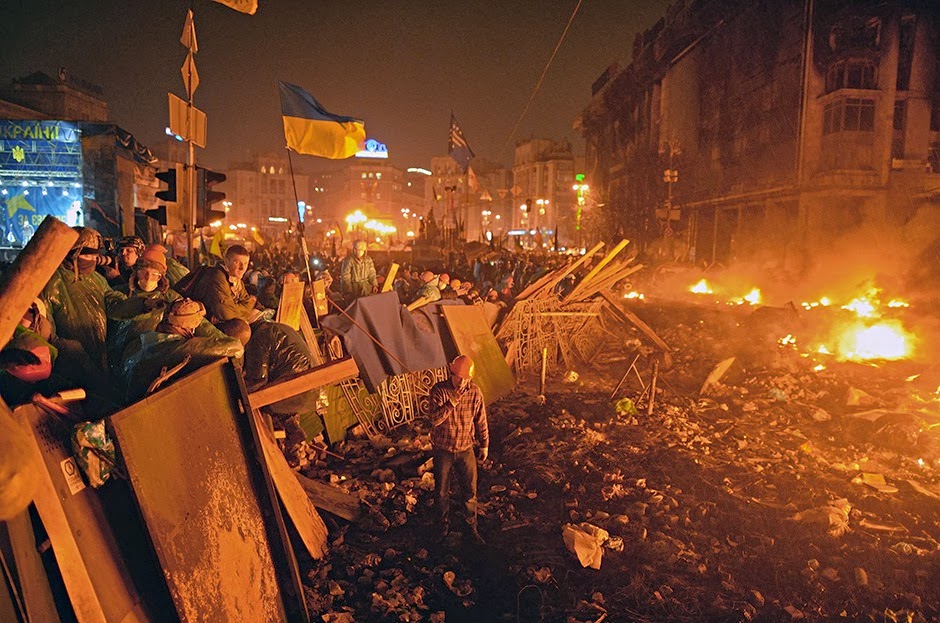 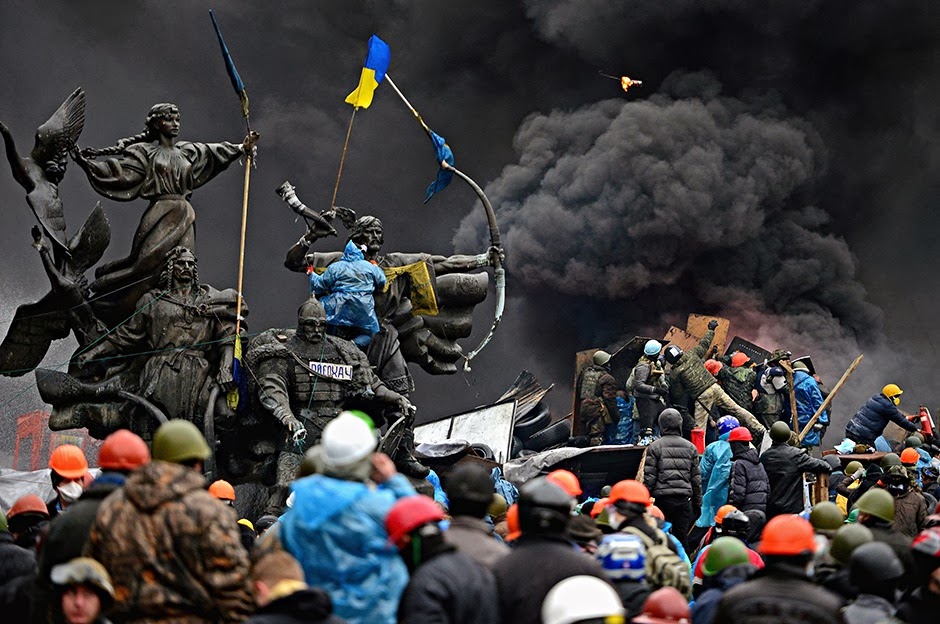 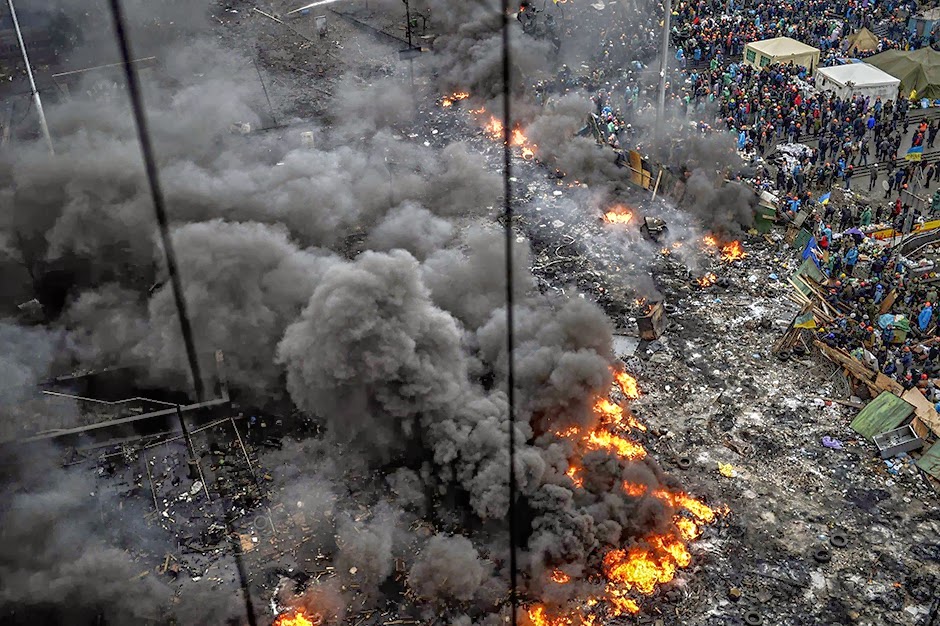 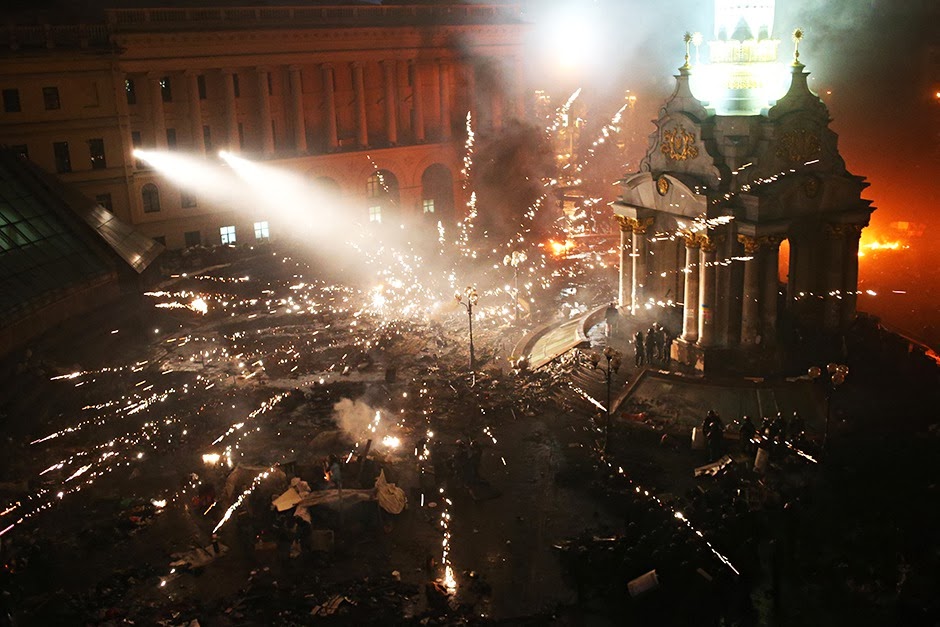 It's hard to photograph this kind of scene. Once you've seen one riot, you've seen them all, though the architecture and the rebels' knowing medievalism (a full size ballista!) helps them stand out for the cameras. It's also dangerous, obviously. To take 'good' photographs and not be killed in the protest is astonishing.

But. The Guardian has a photo-gallery up of these and similar images and I'm not convinced that they're offered as evidence of an awful, awful event. They seem to be offered as a spectacle, something technically stupendous (the composition!) and begging for comparison with so many other apocalyptic: in Baudrillardian terms, the spectacle has replaced the event, which can't be so neatly captured.

But the Guardian isn't what most bothers me. On Twitter, these and many other images are being passed round without any reference to what's actually happening in the Maidan. Instead, 'before and after' shots are offered to emphasise the sheer scale of destruction: this isn't empathy or political support. The images which are circulating are those which most resemble video games, particularly the 'Cursed Earth' ones in which heavily-armoured players fight off radioactive mutants or aliens. They also resemble John Martin's massive Victorian canvases:

Martin's work perhaps had the effect of making his viewers consider their own hubris and folly, but mostly what paintings like this do is aestheticise suffering and play on the viewer's knowledge of what's about to happen, which those in the pictures lack. I find this utterly smug, decadent and pretty repulsive.

Fallout 4 deliberately mimics a well-known Chernobyl shot here, reducing a massive catastrophe to a violent Bildungsroman with an evocative backdrop: 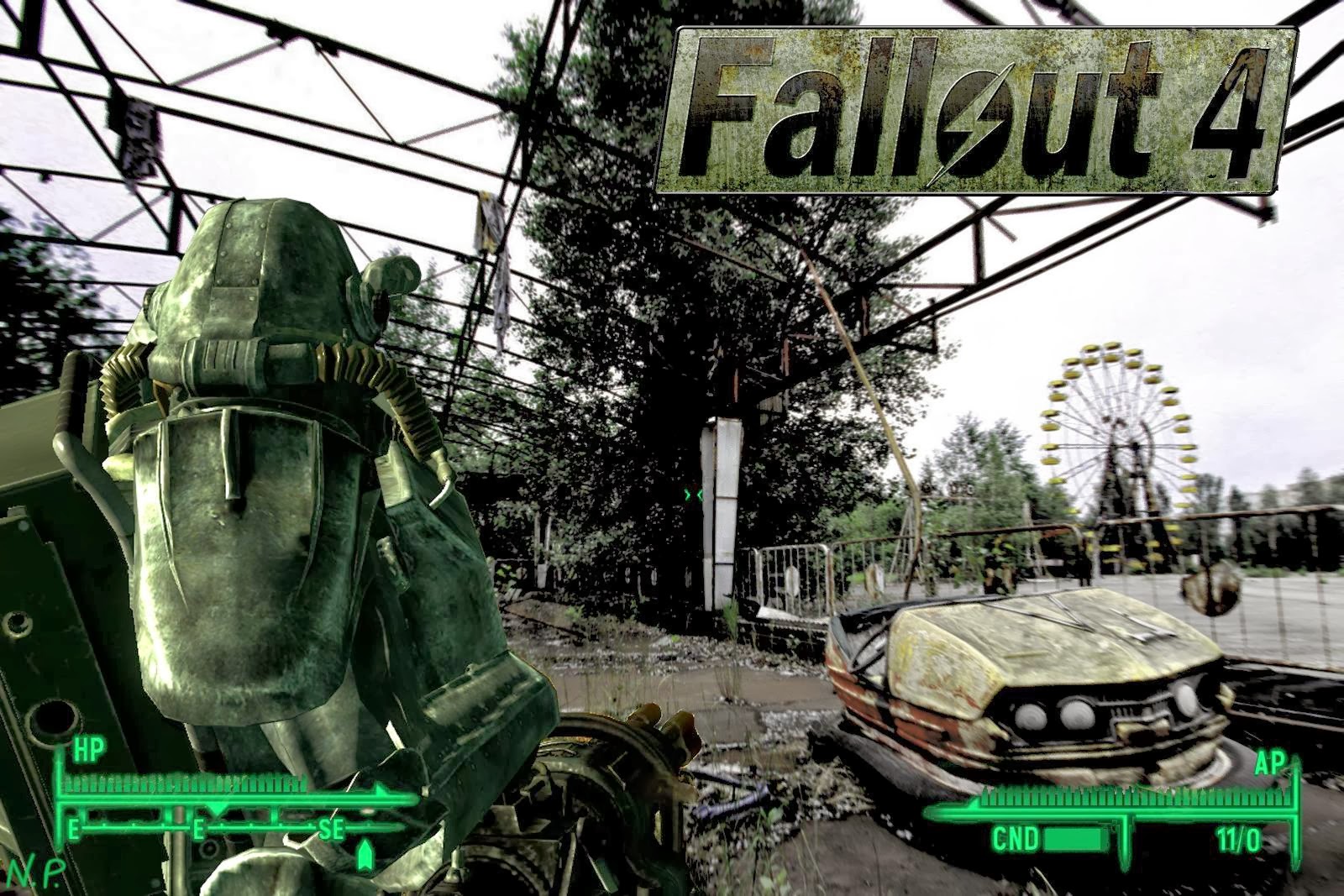 while Resistance is merely one of many which sets ultimate battles between humans or humans and aliens in a ravaged urban backdrop reminiscent of Homs or Kiev: 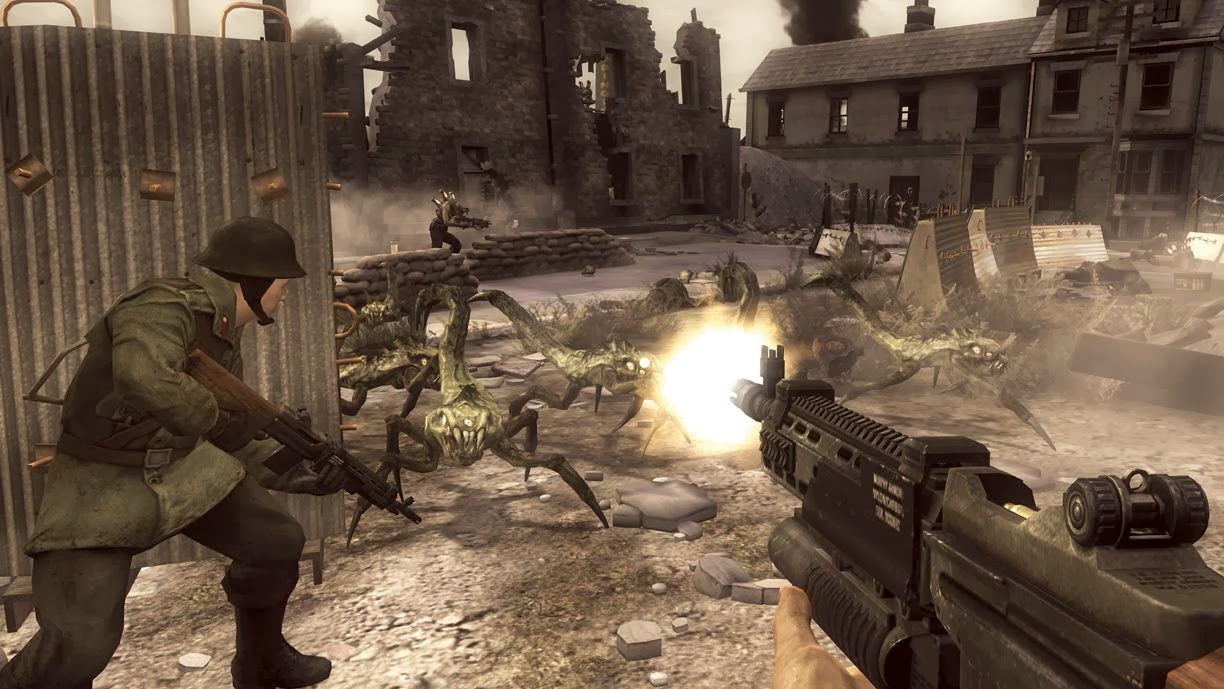 Which is all a very longwinded way of saying that the kinds of images circulated today, and the comments people are making, disturb me. They aren't empathetic. They seem informed by the scale of destruction and the aesthetics of the image rather than what's signified: a classic state of Baudrillardian hyper-reality, fuelled by video games, but also by the propaganda of states which encourage 'shock and awe' while simultaneously promoting the idea that war is as clinical and harmless as playing a video game.

As for those in Maidan Square? Great pics, guys! Good luck with whatever it is you're after! See you!

Update: moronically, I'd completely forgotten until reminded by @qui_oui that Susan Sontag has already considered all this in her book about photography, Regarding the Pain of Others in which she attacks the way news photography fuels a consumerist appetite for destruction shorn of compassion or empathy. Every new atrocity is simply food for our jaded appetites. Yes, we need to know about the horrors of the world, but what are we doing with this knowledge other than marvelling at the images? Much as I object to the Guardian's photo-gallery, Sontag objects to the glossy magazine presentation, shorn of intermediating, interpreting words.
at 19:36

I guess you know about this related work by a former colleague at your Dark Place institution:
http://www.amazon.co.uk/Body-Horror-Photojournalism-Catastrophe-Critical/dp/0719037220/

I quite appreciate your point… But don't you think this tendency might go back a little further than Chernobyl?

Hi all. Thanks. I didn't know about my former colleague's work but will look it up. JPG: I'm sure it does go back a lot further. There are some foul woodcuts from the (British) Civil War too. Thanks for that picture - a perfect illustration.